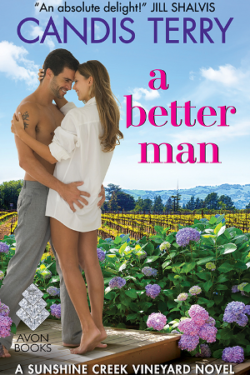 Candis Terry’s writing is reminiscent to me of books by Jill Shalvis, Rachel Lacey and Susan Mallery among others.  I have previously read her SWEET, TEXAS SERIES and FOR LOVE AND HONOR, an anthology that one of her stories is included in.  All were enjoyable reads so I was excited to see the author has a new series out, SUNSHINE CREEK VINEYARD, and it didn’t disappoint!

A BETTER MAN sets the stage for many more books to come since there are six Kincade siblings in all.  This is mainly Jordan’s story although we get to know all of them – eldest brother Ryan, Jordan’s twin, Declan, Parker, Ethan and only girl and youngest, Nicole or Nicki. We also get to know their Aunt Pippy who is living at the main house with Nicki.  Jordan is a professional hockey player and when disaster strikes his family he’s willing to throw it all aside and be there for them.  The last fifteen years he dedicated himself to hockey and his playboy lifestyle and didn’t have much to do with his family.  All that seems about to change now that their parents have died in a helicopter crash while vacationing in Hawaii. The interactions were real as they all grappled with the changes that would affect them especially since they were all named guardians to minor, Nicki, and they each shared a portion of the vineyard owned by their parents of which only Ryan worked at.

Seeing Jordan jump all in to be there especially to help Nicki get back on track with school and find out why she has so much anger was heartwarming – no matter how much she argued.  He enlists the help of her English teacher, Ms. Diamond, after going to a meeting his parents had been scheduled to attend.  He realizes he and Lucy have a history, not all good, and decides to do what he can to apologize fifteen years later.  Their interactions were sometimes aloof, other times confusing or steamy but there definitely was an attraction and chemistry.  Lucy has her own personal demons to deal with and watching Jordan break down her defenses and get her to trust him was heartwarming as was their working together to find out what was really going on with Nicki.

The characters were complex and there were multiple storylines going on at the same time with quite a few twists and turns. Lucy’s dog, Ziggy, added some comedy.  There was a lot of family and hockey with the team and games, the vineyard and the potential to make it better with improvements they all needed to agree to and work on, the small town and its businesses, anger, tears, hurt, a mystery to solve, discussions, family meetings, laughter, breakthroughs, romance, loving and love.  The descriptions of the land were vivid. There was some closure but lots more stories to tell so not all the loose ends were tied up. There was an excerpt from the second book in the series, PERFECT FOR YOU, which is Declan’s story that only whet my appetite for more but I’ll have to wait until the book is published next February to read it.