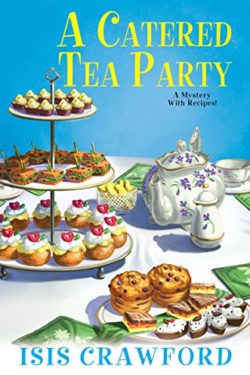 Catering sisters Bernie and Libby Simmons are helping with an elaborate Alice in Wonderland themed tea party for a gala fundraiser celebrating the new Blue House. This new art complex will include an art gallery, a theatre and a restaurant, plus a coffee bar. It is all that anyone in their quiet town of Longley, New York, can talk about. Zeb Zalinsky, the self-made billionaire who is funding the complex, however, is getting on everyone’s bad side with his unreasonable demands.

At five hundred dollars a ticket, only the most elite can attend the benefit and everything has been carefully planned. Things are running smoothly until Zeb picks up a coffee pot and suddenly clutches his chest when his pacemaker malfunctions. However, what looks like an accident is anything but as the death is declared a homicide.

Setting out to solve the murder, the sleuthing sisters discover quite a few who wanted to see Zeb dead and the suspects begin to mount up. As if that is not enough, the sisters also have to deal with their father’s much younger girlfriend who does everything she can to gain his attention and make his daughters look bad in his eyes. Will the sisters be able to discover the identity of the killer before they become his next target?

A CATERED TEA PARTY, the latest book in author Isis Crawford’s A MYSTERY WITH RECIPES series, is an intriguing, contemporary cozy mystery that will make you think as you try to solve the case alongside the sisters. I have enjoyed the previous books in this series and also liked this one. However, I don’t know if it was due to the overbearing girlfriend or what it was that made the difference, but the two sisters, especially Libby, seem to come across differently this time, with a bit more complaining and whining. That did detract a bit from the story, even though I enjoyed the mystery as I tried to figure out whodunit. I still will look forward to the next book in this series and the quirky characters that are the mainstay of the collection. Additionally, I relish the mouthwatering recipes that are included in each novel. Although this book is part of a series, it can be read as a standalone.