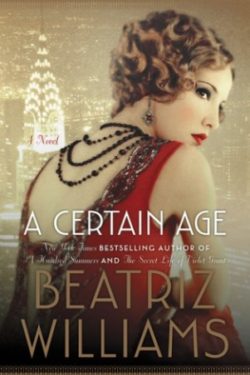 A CERTAIN AGE is women’s fiction set in the 1920’s over a period of about six months.  The story is told by newspaper articles in the New York Times relating to a murder trial that is woven throughout or by two of the main characters, Sophie and Theresa.  Theresa is a socialite whose husband has always had mistresses and even a child out of wedlock.  Theresa and her husband have three grown sons and since she’s bored she decides to have her own affair with a boy-toy whom she even calls Boyo.  Boyo or Octavian is woven throughout the story as both Theresa’s love interest as well a a friend to Sophie, or is it more?

Theresa’s family and friends are involved in party after party.  They visit jazz halls, always have something to celebrate or gossip about and live in Manhattan or Long Island, in season.  Sophie’s family is much more low-key since her dad earned his money through patents he received for various items he created and they don’t live at all as if they have money.  Sophie also has his knack for building things and taking things apart to see how they work and it’s one of her favorite ways to spend her days.  Her sister, Virgo and Virgo’s daughter, are integral to the story but where is Virgo’s elusive husband?  The two families cross paths over and over again and while seemingly have nothing in common there is an engagement that Sophie’s dad and Theresa think will benefit both of their families if Sophie and Theresa’s brother, Jay, a confirmed bachelor, become engaged.

There are multiple stories being told throughout and a lot of important twists and turns even if it doesn’t seem that way at first.  There are scandals, scandalous acts, sadness, tears, frustration, anger, duplicity, fear, secrets, laughter, happiness, loving and love.  Ultimately who loves who is revealed and there is closure.  Loose ends are tied up except for Virgo’s husband which an epilogue could have resolved.

Williams is a new to me author and I enjoyed her style of writing.  I will look for other books she has written and will add them to my always growing TBR pile!