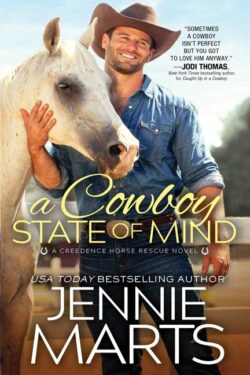 A COWBOY STATE OF MIND is the first book in the CREEDENCE HORSE RESCUE series, and it pulled me in from the very first page. I was drawn to the rescues of not only animals but people too. This is a quick-paced read with a lot of interwoven story lines. It’s a steamy, heartfelt romance between two well-matched characters.

Bryn has such a big heart, even if she doesn’t always have the money to back up her plans. But the people in the small town of Creedence, Colorado like her and try to help her out whenever they can. Bryn’s friendship with Elle also adds another layer to the story, fleshing out Bryn’s character.

Zane had a difficult childhood, and the abuse continues thanks to his dad. Every now and then Zane’s father seems almost caring, but then alcohol ruins it. Zane has low self esteem. He doesn’t see a future with anyone since he feels broken and has the scars to prove it. Yet despite that, he always helps others, especially Bryn and his nameless dog. Bryn has a way of opening him to possibilities. She seems to have that effect on others.

The characters and plot work well. The author’s descriptions are vivid, including the animals and the farm, and especially the abuse the animals suffer, as well as the care to get them well. There are characters we’ve met before from the COWBOYS OF CREEDENCE series, which is connected to this new series.But again, the book reads just fine on its own.

I didn’t realize that Ms. Marts also writes a cozy mystery series along with her contemporary romances. I have added a few more of her books to my always growing TBR pile.