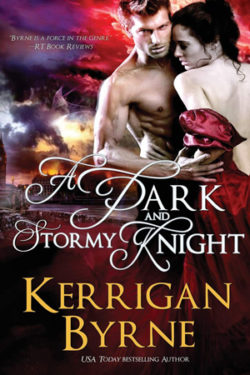 Sir Carlton “Cutter” Morley is the Chief Inspector for Scotland Yard. At night, he is the vigilante Knight of Shadows. An investigation leads Morley to a brothel and into the arms of a virginal, society miss. He cannot forget about the woman, and their path crosses again at a crime scene. Prudence Goode surprises Morley with her situation. Can Morley prove Prudence’s innocence? Or will his past stand in the way of their happiness?

Prudence Goode is the second daughter of the Baron of Cresthaven. She is devastated by her betrothed’s infidelity. Prudence secretly visits an exclusive brothel and mistakes Morley for a prostitute. A murder cancels her wedding. And the inspector investigating the case is her mysterious lover. Can Prudence help Morley prove her innocence? What other hurtles must she overcome?

I am delighted that Morley finally received his happily-ever-after. He definitely deserved one. I admit I did not care much for Morley at the start of the series. However, he steadily grew on me with each new book. I admire Morley’s fortitude to forge a new identity and way-of-life. It took the death of someone important to give him the impetuous to escape the drudgery of poverty. What I adore the most about Morley is how active he is in Prudence’s pregnancy. He wanted to be involved in each important milestone.

Prudence is the perfect fit for Morley. Her whimsical personality and natural innocence are great contrasts to his jadedness and dark nature. I adore how Prudence never once behaved as if she is better than anyone. From nobility to the working-class, she treats everyone the same. What I like the most about Prudence is how she helps Morley take better care of himself. He always joined her at meals because of her cravings by whisking Prudence off to various restaurants to satisfy her.

A DARK AND STORMY KNIGHT is book seven in Kerrigan Byrne’s popular historical romance series, VICTORIAN REBELS. The story can be read alone. However, it is imperative to read the prior books to better understand Morley’s tenuous relationship with certain characters. I love that The Rook, Blackwell, and Argent play important roles throughout the story. I miss those three along with their ladies.

A DARK AND STORMY KNIGHT is a beautiful yet touching tale of opposites attract. I truly did not want this book to end. I hope the author considers writing a story for Honoria and Titus. I eagerly await the next installment.