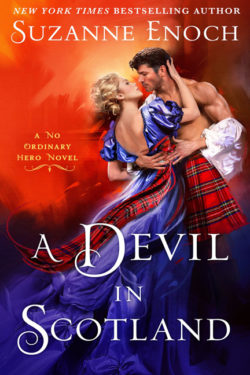 Callum MacCreath owns and operates a successful whiskey distillery in Kentucky. He returns to Scotland to seek vengeance on the two men responsible for his brother’s death. Callum succeeds to sway Rebecca Sanderson-MacCreath against the sinister Duke of Dunncraigh. He will do anything to safeguard Rebecca and his six-year-old niece from any backlash, so Callum searches for proof to incriminate the duke and his son of their unlawful misdeeds. Can he give up his thirst for revenge? Will Callum be able to implicate the Duke before the man kills him too?

Rebecca “Becca” Sanderson-MacCreath is the only child of an English shipping businessman. The untimely death of both her husband and her father makes Becca the wealthiest woman in Scotland. Callum barges back into her life and turns her world upside down. Rebecca refuses, at first, to believe his slanderous claims about her business partners. When she discovers the truth, Becca convinces Callum to seek justice instead of revenge. Can they win against the Duke of Dunncraigh? Or will Becca lose yet another person she cares about?

I adore the fact that Callum and the MacCreaths have heterochromia, a rare condition of two different colored eyes. It is a trait rarely seen outside of Japanese animation. I love the major metamorphosis Callum undergoes in Kentucky. His banishment from Scotland gives him the much needed incentive to change his wild and reckless ways. He is no longer a hot-headed, irresponsible drunk; instead, he becomes a cunning adversary, who enjoys luring his prey into underestimating him. What I love the most about Callum is his adaptability. He willingly changes his plans for revenge upon discovering his six-year-old niece, Margaret.

I admire the eighteen-year-old Rebecca for realizing the sort of life she would have had with a drunken and irresponsible Callum. She prudently chooses a life of stability and security over one of uncertainty and excitement. I understand Becca’s reluctance at trusting and believing Callum’s accusations when he first returns into her life. But what I like the most about Rebecca is her persistence in talking Callum into seeking justice instead of vengeance. She knows it is the only safe way to keep him in her and her six-year-old daughter’s lives permanently.

A DEVIL IN SCOTLAND is book three in Suzanne Enoch’s historical romance series, NO ORDINARY HERO. I like how this story concludes Dunncraigh’s villainy. I adore that Gabriel Forrester, from HERO IN THE HIGHLANDS, and Graeme Maxton, from MY ONE TRUE HIGHLANDER, make a small appearance in the book.

A DEVIL IN SCOTLAND is an enthralling story with a murder-mystery edge to spice it up. I like how the author ends the trilogy with the villain finally reaping what he sows.