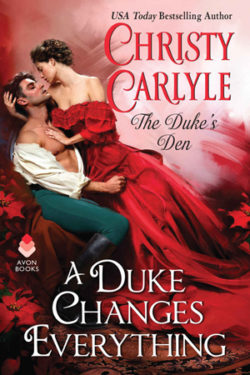 A DUKE CHANGES EVERYTHING by Christy Carlyle is an enlightening tale of a Duke who doesn’t want to be one and a female steward who has been raised in and loves the manor the Duke wants to destroy.

The Duke, Nick Lyon, runs a gambling den in London and has been informed his older brother is dead and he is now the Duke of Tremayne. The Duke’s estate is called Enderley Castle and all the Duke wants to do is destroy everything in it and rent it out as he has nothing but bitter memories of the place and his vicious, vindictive father.

Arriving at the estate the Duke finds that the steward, who he believes is male, is a young female. Mina is the daughter of the estate’s steward and has been managing the estate since the death of her father two years prior. Now Mina has to figure out how to get the new Duke to take care of all the problems left behind by his brother, who did nothing about the upkeep of the estate. The Duke arrives to set his wants in motion, only to come up against Mina and her love of the estate and its people.

Things heat up as Mina gets the Duke to meet his tenants and the people of the village. Mina sees two sides of the Duke and as they grow closer she learns of his childhood and his treatment by is father.

The storyline and the romance continue on with some interesting incidents and there is a HEA which is quite satisfactory. I really liked this book it was certainly different from the many historical romances I have read lately.