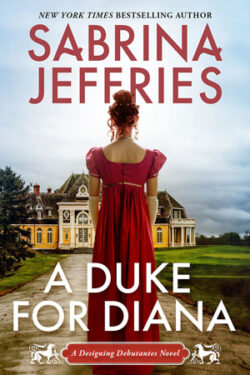 Civil engineer Geoffrey Brookhouse finds himself the new Duke of Grenwood. He has a secret that could destroy not only himself but his mother and sister also. Geoffrey plans on giving his sister a London Season in hopes of finding her a husband. He hires Elegant Occasions to prepare Rosabel for her debut. However, one of the co-owners intends on molding Geoffrey into a presentable nobleman as well. Will Geoffrey’s secret destroy a possibility for a future? Or will he be forced to give up the woman he loves?

Lady Diana Harper is the middle daughter of an earl. She and her two sisters weather the scandal their parents created. Diana handles the fashion part of the party planner business she and her sisters started. Having Geoffrey as a client could boost their business, but the man proves vexing to work with. Diana cannot resist needling him into his new role. Soon sparks ignite between the two. Can Diana help Geoffrey with his secret? Or will it stand in the way of their happiness?

Geoffrey is not your run-of-the-mill duke. He grew up in the working class, so his mindset and outlook differ from other noblemen.  Sometimes Geoffrey has difficulties accepting and understanding the ton’s rules and whims. I admire Geoffrey’s devotion to his family. He tries so hard to shield his mother and his sister from harm, even to the point of hindering himself. Also, Geoffrey wants to give his shy sister the best possible future. What I adore the most about Geoffrey is his thoughtfulness toward Diana and her sisters. He is always mindful of her reputation. Geoffrey does not want to add extra burdens to Diana.

Diana is such an inspirational woman. She refused to accept the professions allowed to women of her station. Instead, Diana and her sisters forged their own path despite society’s scrutiny. I understand Diana’s outlook on matrimony and relationships. Her parents’ marriage did not leave a good impression on her. Plus, Diana refused to follow their mistakes. What I admire about Diana is how she researched what a civil engineer was. She wanted to better understand Geoffrey and his interests.

A DUKE FOR DIANA is the first book in Sabrina Jeffries’ brand-new historical romance series, DESIGNING DEBUTANTES. I have been intrigued by the series’ premise since the author mentioned it on Facebook. I admire how the Harper sisters took their individual strengths and started a business, especially since it is frowned upon by their peers.

A DUKE FOR DIANA is a captivating story of two people overcoming familial obstacles to find love and acceptance. I will be continuing this series. I cannot wait to see which Harper sister is next!