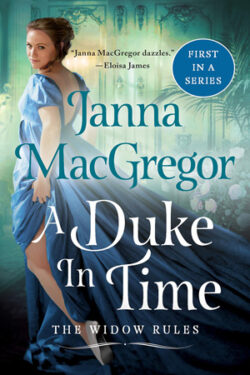 Christian Vareck, the Duke of Randford, is a celebrated war hero. He wants nothing to do with his half-brother’s messes, especially the man’s three widows. One widow insists that Christian help them find a solution to avoid social ruin. He needs Kat’s assistance to establish a business to support his soldiers. Christian never imagined he would fall in love with her. Can Christian overcome his emotional demons? Will Katherine’s secrets destroy any hope of a future together?

Katherine “Kat” Vareck owns and operates a popular linen and begging store. She hopes to further her business by winning the contract to be a royal supplier. After her husband’s untimely death, Kat discovers the cad had two other wives. She wants to help the women avoid ruination by asking their brother-in-law, the Duke of Randford, for help. However, Kat’s own past threatens to destroy everything she has built. Can Katherine put her past to rest for good? Or will her secrets stand in the way of her future?

Christian is such a sweetheart. He is a man who has been hurt by his father and stepmother’s cool indifference and wild ways. His gruff attitude hides a vulnerable heart.  I admire Christian’s determination to help his soldiers, mainly the ones born in the common case. He is even willing to use his noble influence for their benefit. What I love the most about Christian is his acceptance of Katherine. He never looked down on her, once he learned about her background and past. Also, Christian acknowledges and admires Kat’s business sense.

Katherine is such an inspirational woman. She proves that a woman does not need a man to succeed in the world. Katherine may have come from a murky background, but she never allowed that to dictate her future. I admire Katherine’s ability to build a successful business from nothing, especially in a male-dominated society. She purposely hires those the public snubs or looks down on. What I adore the most about Katherine is how she willingly takes care of the other wives. She could have left them to their own devices. Instead, she invited them into her home and looked after them.

A DUKE IN TIME is book one in Janna MacGregor’s brand-new historical romance series, THE WIDOW RULES. This is my first venture in this author’s works. The story’s premise is what captured my attention. The trigamist angle is not commonly found in historical romances, especially amongst the echelon. I plain to check out the author’s backlog once time permits since I enjoyed her writing style.

A DUKE IN TIME is a captivating tale of two wounded souls realizing where they truly belong. I have an inkling on who the author plans to pair Beth Howell with; however, I am looking forward for Constance and Jonathan’s book first.