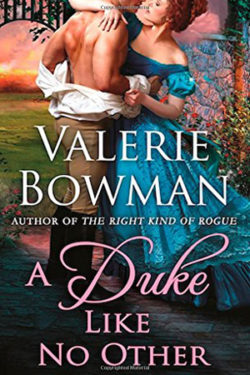 A DUKE LIKE NO OTHER by Valerie Bowman, is the next book in her “Playful Brides” series.

An unusual story as the romance is a second time around for General Mark Grimaldi and his estranged wife, Nicole Huntington Grimaldi. Married ten years ago, when the story opens, Mark has spent that time focusing on his military career. Nicole has spent the ten years in France without a husband and without regrets. Neither filed for divorce.

Now Mark has been offered the prestigious promotion to Home Secretary, he would be the head spy over all the other spies in London. There’s only one condition, he must be married. He needs a respectable woman for a wife, or so he’s been told. The only problem is he’s already married to Nicole who exiled herself to France. She has supported her self working for the London War Office and for the authorities in France.

Mark goes to France and tells Nicole he’ll give her anything she wants, if she will come back to England and live as his wife at least until his station is confirmed.

Nicole tells Mark she’ll gladly portray the happy wife, if he will give her a baby.The only legitimate way for that to happen is with Mark’s assistance. He agrees, but with the condition they become reacquainted before intimacy. He wants their lovemaking to have meaning. Nicole is afraid if they do that she will fall back into her obsession for Mark.

Nicole wants to raise the child on her own in France, and not be obligated to any man. There is a  mystery when Mark’s healthy cousin drops dead, leaving Mark in line to be the next Duke. Nicole and Mark set out to investigate his death.

This book has humor, drama, mystery and a RED-HOT re-kindled romance.

Author Valerie Bowman seamlessly inserts passages about their past. It added a whole other degree to the story as the reader slowly learns what kept Nicole and Mark apart for ten years. I loved this story!