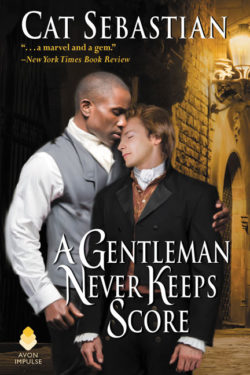 A GENTLEMAN NEVER KEEPS SCORE by Cat Sebastian is the second in her Seducing the Sedgwicks series of gay romance set in the Regency era and a completely stand-alone novel.

Hartley Sedgwick used to be a prominent member of London society, until scandal forced him into seclusion. Gossip exposed his attraction for men. Now an outcast, he hides away in his lonely house with only his servants for company. Despite the repeated attempts of family, he eschews their company, not wanting his reputation to sully his brothers.

Sam Fox, a retired boxer and owner of a pub, a safe meeting place for those in his Free Black community, is a protector. In the course of trying to recover a damaging painting for a friend, he meets Hartley. The two men have an instant connection despite their different races and stations in life. And the romance that blossoms between them is both heartwarming and heart-wrenching.

When much younger, Hartley was been hurt and betrayed by those who should have cared for him. And he’s in a precarious place as it is, his sexuality considered unnatural, not to mention illegal, in his world. Here Cat Sebastian really shines, doing such a wonderful job by showing Hartley slowly heal under the loving touch of a man like Sam, a hero worthy of the title.

Sam is strong, bold, and safe, a large, muscular man who dislikes hurting others unless he’s forced to. Sam also has demons to overcome, and watching him fall in love with the wounded Hartley was lovely.

The secondary characters are rich, the emotional relationship between the men deep and fulfilling, and the physical intimacies, unconventional due to Hartley’s trauma, totally add to the depth of this wonderful book. Cat Sebastian is one author to look out for. A GENTLEMAN NEVER KEEPS SCORE is a must read!