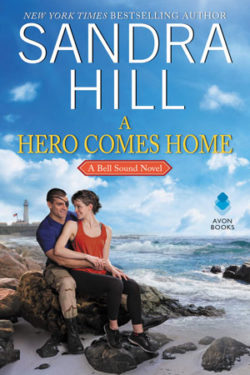 It was nice to return to Bell Cove in A HERO COMES HOME, the third book in the BELL SOUND series. For me, it was another five star read just like the first book, THE FOREVER CHRISTMAS TREE. I read A HERO COMES HOME in a few hours because I couldn’t put it down. I somehow missed book two in the series, LIFE, LOVE AND THE PURSUIT OF HAPPINESS that I’ll have to get my hands on.

This is Jake and Sally’s story, and it had a realism to it, especially with the government’s involvement and spin they put on things. Jake was captured in Afghanistan three years ago and declared dead. When he’s released by the enemy, his wife, Sally, is thrown for a loop. After Jake was declared dead, Sally moved on with her life. She started a business and is raising their three sons.

Jake doesn’t even know if he wants to return home because of all he’s been through. His injuries seem the least of it. The town rallies around him and his family, much to his chagrin. Once again the townspeople are up to their crazy antics.

The characters have real depth to them, and the emotions in this story run deep. There are a lot of tears as well as laugh-out-loud moments while Jake and Sally try to figure out where life will take them. I like how their three young sons are portrayed and how Jake becomes a part of their lives again.

A HERO COMES HOME has nice closure (with an epilogue), but there are definitely more stories to tell. There are wonderful descriptions of the town and the Outer Banks. I especially love the chapters’ titles. The cover is lovely. I hope we return to Bell Cove many more times!