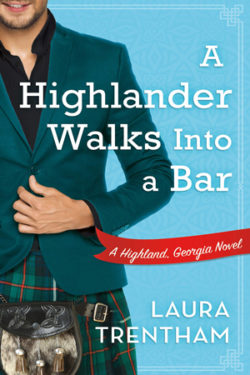 Laura Trentham has written a delightful, funny, and sometimes steamy novel in A HIGHLANDER WALKS INTO A BAR.

Isabel Buchanan is full of energy and has an answer for everything. However, she is speechless when she arrives at the airport in Atlanta,GA to pick up her mother from her trip to Scotland. Her mother, Rosie, has brought home a souvenir—a six foot tall, very handsome Scotsman named Gareth, whom Isabel believes to be the groundskeeper of a castle in Scotland.

Rosie is totally infatuated with Gareth Conners, who has agreed to help plan and put on the annual Highland Games. Rosie and Isabel carry on the tradition Rosie’s deceased father had started on Rosie’s estate, Stonehaven, in Highland, GA.

Isabel, Izzy to her friends, ends up doing most of the work on the Highland Games. She is worried Gareth is after her mom’s estate and continues to keep her eye on Gareth. But she only finds that he is enamored with her mom.

At his mother’s urging, Alasdair Blackmoor arrives, straight from Scotland, to fetch his Uncle Gareth home. His mother is sure the American tart is after Gareth’s money and Cairndow Castle. Gareth Blackmoor is actually the ninth Earl of Cairndow, and Alasdair will one day inherit the title.

Gareth convinces Alasdair to keep his identity secret and stay until after the Highland Games. Then Gareth will tell Rosie the truth. Alasdair and Gareth tell the women they are friends. In the meantime, Alasdair works on mending the rift between him and his uncle, which started ten years ago.

The roguish Alasdair spends time with Izzy and helps with the Games. Izzy and Alasdair become friends and eventually lovers.

There are so many cute moments in this book. When the games are over and it comes time for Gareth and Alasdair to head back to Scotland, they are all sad. But Gareth has a castle to run, and Alasdair has an important, well-paying job back in London. Izzy has her job and Rosie to run the estate. Will Alasdair come up with the perfect solution for both couples to get their happily ever afters?

I loved this book!  A fast-paced wonderful story.