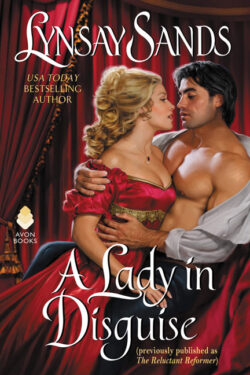 A LADY IN DISGUISE by Lynsay Sands has one of the most unique premises I have read in a long time. In a case of mistaken identity/occupation, Lady Margaret Wentworth (Maggie) is ‘kidnapped’ from Madame Dubarry’s house of prostitution by Lord Ramsey (James) and taken to James’ estate. Maggie was at Madame Dubarry’s doing research for a newspaper article she is writing under her deceased brother’s pen name. James believes Maggie is selling herself for the funds to support her style of living and he was asked by Maggie’s dying brother to watch over Maggie. The misconception continues because while saying one thing James and Maggie are confusing what they are hearing, each believes one thing while the other believes something else causing more confusion between the two. Meanwhile they become aware that someone is trying to kill Maggie but they can’t figure out why. From the chase, to understanding, to the mystery and its resolution the book flows excitedly to a very satisfactory ending. It should be noted that this book was originally published in 2002 as The Reluctant Reformer by a different publishing company.