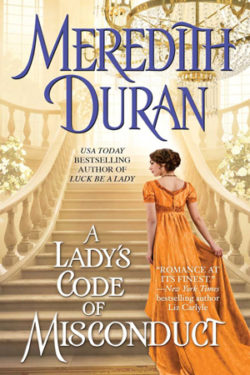 A LADY’S CODE of MISCONDUCT is the best Victorian romance I’ve read! The fifth book in RULES FOR THE RECKLESS SERIES, I have to give this book FIVE BIG HEARTS!!!!

This is the first book I’ve read where I felt the amnesia trope was well executed. The plot is cleverly written.

A sham marriage, political intrigue, and a case of amnesia this story is sure to delight.

Lord Crispin Burke and Lady Jane have known each other for a long time as Crispin was a frequent visitor to her Uncle’s house. Crispin is handsome, arrogant and condescending, and not a likeable man. He doesn’t trust anyone.

The plan changes when an attempt on Lord Crispin’s life leaves him on death’s doorstep. The doctors feel it is a matter of days until he dies from his head wound.

Lady Jane seeing her plan to spy in exchange for being rescued going down the drain, seizes upon another means of escape. She falsifies marriage documents stating she and Lord Crispin are married. Never expecting Lord Crispin to recover, but he does recover except he has no recollection of the last 5 years.

The characters are well developed and the author does a superb job of showing us how this incident gives both the hero and heroine a chance to grow.

Crispin learns about his past bit by bit, and what a terrible reckless person he was, and is able to meld himself into a person worthy of Lady Jane’s love. He learns that Jane is the one person in the world he can trust.

The dialogue between the characters is excellent. There is a political side to the plot which is well drawn and totally believable.

Lady Jane has lied to everyone about being married. So she has her own growing to do.

As their relationship develops and Lady Jane garners a new perspective on Lord Crispin, and on herself, the story heats up and there are some very steamy sex scenes.

Buy this book and go on their journey and I know you won’t be disappointed.