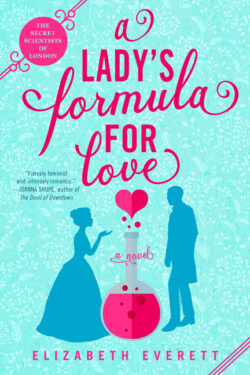 A LADY’S FORMULA TO LOVE is the debut novel of Ms. Everett and the first book in THE SECRET SCIENTISTS OF LONDON series. The club is for women scientists who don’t hold any sway in the mid 1800’s in London, especially since they are considered the property of their husbands. Violet, along with two of her friends, create Athena’s Retreat, which is attached to the home Violet lived in with her much older husband (who has since died.) Her stepson, Grey, decides she needs protection and hires Arthur to keep an eye on things. Arthur does so much more though!

After marrying, Violet became a shadow of her former self and let her husband dictate her thoughts and actions. As she strives to move forward after his death, the reader is immersed in all things science. Unfortunately, Violet experiences acts of violence against her, which is where Arthur comes in. The characters are rich, the plot fast-paced, and the mysteries intriguing. My only problem with the story is that it sometimes gets bogged down with all the scientific discussion and terminology. But there’s nice closure and a satisfying happily-ever-after. I look forward to reading more in this series.

A LADY’S FORMULA TO LOVE is exciting, fun, and includes a love story and intrigue that make it hard to put the book down.