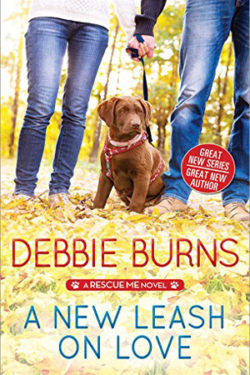 In A NEW LEASH ON LOVE by Debbie Burns, Megan Anderson rescues endangered and abandoned animals and runs a no-kill animal shelter. Her goal is finding forever homes for all the fur babies. It is a hard job but one she loves because of the unconditional love she receives from the critters in her care and the people who work by her side.

After the holidays, the shelter fills up fast. People give pets as gifts, but sometimes the placement of the pet does not work out. Megan has just returned to the shelter from rescuing a dog when she crosses paths with Craig Williams, who is bringing a puppy to the shelter. She’s angry over the circumstances these animals are put in and has no hesitation taking her frustration out on Craig.

Craig Williams’s life has fallen apart. His marriage is over. His ex-wife has called him, complaining that the puppy they got their daughter chews up everything and is difficult for them to handle. Craig cannot have an animal at his new home so decides the best thing to do is take him to a no-kill shelter. He wants the puppy to be placed in a loving home but did not expect to run into the shelter manager, who makes him feel lower than a skunk’s belly for giving up the puppy.

A NEW LEASH ON LOVE is the love story of Megan and Craig. Megan is so devoted to the shelter, she believes she doesn’t have time for any type of romantic involvements. She never expected to become attracted to someone like Craig, but when his daughter volunteers at the shelter to help care for the various pets, she realizes her initial impressions of him were wrong. Craig is still reeling from a devastating personal loss in addition to his marriage ending. Watching Megan with his daughter makes him feel things he thought were lost to him. Getting his life back together doesn’t mean getting involved with another woman. Right?  Well, the head might lead you in one direction, but what’s in the heart will always win in the end.

As someone who has rescued so many animals over the years, I really enjoyed this warm, wonderful story by Debbie Burns.  A NEW LEASH ON LOVE is the first book of the Rescue Me Series. I am eager to read the next story.