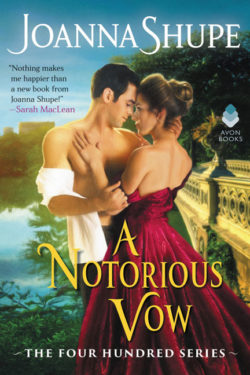 A NOTORIOUS VOW by Joanna Shupe is the third book in the Four Hundred series. The story is set in New York City in 1890, what is known as the gilded age.The author does a superb job describing what society thought of people with disabilities  both physical and emotional, in the 1890’s.

Oliver is a rich recluse and a very smart inventor. He has chosen to stay away from society because of his disability, being deaf. He lost his hearing at 13 so he can speak when he wants to. Usually he just uses sign language.

Lady Christina is emotionally disabled because her parents control her every move. She’s never made a decision on her own.

In England, her parents squandered the inheritance they were left and with creditors banging on the door, they fled to New York City to a cousin’s house. The parents are bent on marrying off Christina to a wealthy American and becoming rich through her.

The cousin lives next to Oliver. Lady Christina secretly strolls through Oliver’s secluded garden early every morning. Christina has an accident in the garden and meets Oliver when he comes to her rescue. Over time they become friends, each confiding in the other. While they do harbor feelings for each other, they do not express it. Oliver does not want to saddle Christina with a deaf husband. He doesn’t like socializing and she does,

When Oliver learns of her parents plot to marry 20 year old Christina to a 90 yr. old man, he steps in and marries her. They agreed to only stay married for a year and a day. Neither one has much self-esteem and feels the other couldn’t possibly love them.

There are so many scenes that touched my heart. Society was not as accepting back then as it is now of people with disabilities. The author did her research and includes a lot of history on schools for the deaf and how the deaf were treated.

I highly recommend this book!