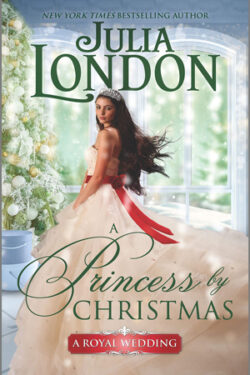 A PRINCESS BY CHRISTMAS is the third book in the A ROYAL WEDDING series. I have only read the second book previously, A ROYAL KISS AND TELL, and I couldn’t wait to read more. This is a fast-paced, historical romance with a mystery in the middle, and it definitely entertains!

This time it is Hollis’s story, and she’s still printing her gazette that gives news/gossip as well as helpful hints and fashion advice. She’s ahead of her time since she wants to be involved in so many things that are only a man’s domain. Hollis has been widowed for three years. She’s been doing her best to keep the gazette alive, which her husband started.

Hollis overhears others talking about a coup against the king of Wesloria. In trying to get to the truth, she captures the attention of Marek Brendan, a Weslorian who works in the Weslorian government. But he has secrets. When he lets his guard down, he tells Hollis about them and she is sworn to secrecy. From there, she attempts to help him solve the mystery of why the king is feeling ill and not taking part in certain peace negotiations.

There were a lot of gatherings, especially since the book is set at Christmas. We get to reunite with characters we’ve met before and see how their lives are turning out. It was nice to see Hollis and Marek develop their relationship. There is nice closure with the epilogue that takes place at Marek’s home. It was a better than anticipated happily ever after on several fronts.

Ms. London is an author I found not long ago. She was always on my radar but I somehow had never gotten around to reading any of her books.  I’ve now read some of her historical romances as well as some of her books in other genres and I have added quite a few more to my TBR pile.  I look forward to reading them all.