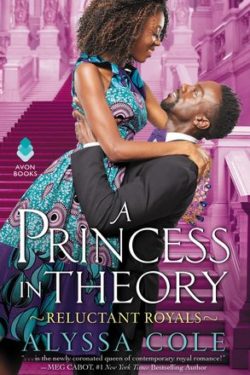 Naledi Smith, a pretty college student, is frustrated. She keeps receiving annoying emails stating that she is bespoken for to an African prince. Really? Not in her lifetime! Besides she is an orphan and her parents were killed in an accident. Naledi knows that no one wants her, much less a prince, so why should she think otherwise? She is currently studying for tests and dealing with annoying coworkers. She doesn’t have time for wacky emails.

Prince Thabiso, exclusive heir to the throne of Thesolo, is in a quandary. His parents are hassling him about his responsibilities, namely to his country, his title and most importantly, his wedding nuptials. He is single and everyone in the kingdom is eyeing him for their daughters. It is imperative Thabiso finds his pledged fiancee, Naledi and fast!

Thabiso finds her but mistaken identity ensues and Ledi thinks he is someone else. Oh well, Thabiso goes along with it, but will it be his downfall? He is smitten with the brassy beauty and her brains. Only, he hesitates about telling her about her real ancestry. Does Naledi fall for the hot new man in her life or will she give him the boot?

A PRINCESS IN THEORY is a funny, fast-moving, smart-alecky romance. Naledi, an epidemiology student and a suave African prince, Thabiso, are a match made in heaven, um…only if Thabiso can convince Naledi she is an actual princess. Oh wait, he never tells her. Uh oh! Disaster looms ahead! Genuine laughs, nutty scenarios, witty one-liners, and an irresistible romance round out the plot. Ms. Cole writes with warmth and intellect, covering a multitude of ancestral, historical African cultures. Her characters are strong and compassionate, and are dealt with many complications in life. Like Naledi, who is a tough, independent woman and learns she is truly a lost princess. But, Naledi handles it with aplomb and sarcastic remarks. Thabiso, a heart-throb prince, is really spoiled and learns fast that he needs to adjust to Naledi’s lifestyle if he is to win her over. Will Thabiso win Ledi’s heart? A PRINCESS IN THEORY is pure fun. It will have you laughing, cringing and hooked from the start!