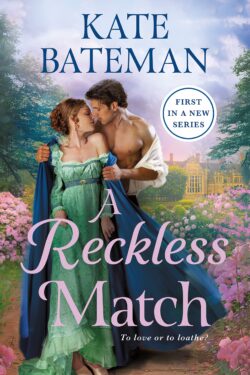 A RECKLESS MATCH is a romantic trope full of secrets, suspense, and squabbling galore. A battle between two neighboring estates that spans decades, the Davies and Montgomery families, yields two individuals, Madeline Montgomery and Gryffud Davies. They grew up quarreling with each other, but unbeknownst to their traitorous hearts, they secretly are attracted to one another. Madeline is currently saddled with rescuing her family from financial disaster. She is currently waiting at the designated spot for a Davies to show up at the appointed time, to seal the deal between their neighboring lands, only to see Gryff, her irritating nemesis, who she thought was off in London being his rakish self. What the heck?

Gryffud Davies, a devastating, handsome man, is enjoying life in London after spending most of his adult life fighting in the Napoleonic war. However, he retreats to his family’s estate, after fighting in a prohibited battle over love. He hopes to see Maddie again, the girl he loved to annoy while growing up. Time spent in the country will be tolerable if he can clash again with the fiery beauty. Gryff’s heart gives a leap of joy upon seeing the gorgeous Maddie all grown up into a lovely lady. They still have hostility towards each other but something, a kernel of hope and quite possibly attraction blossoms in their hearts. As they stumble upon a secret vein of gold hidden in a cavern below their estates, along with illegal contraband, will time spent together spelunking, renew their flaming attraction to one another long enough to see that they are meant to be?

Sizzling suspense and a ravishing romance dazzles the senses in Ms. Bateman’s new novel, A RECKLESS MATCH, in the new series Ruthless Rivals. An intriguing premise, a clash between clans, and non-stop action and adventure with dramatic romance nestled in-between, delivers delightful, dazzling dialogue in this astounding adventure. Madeline and Gryffud are arch rivals from way back, but current circumstances throw them together, but cupid’s arrow finds them, blasting them with unbridled passion. This is a perfect historical romance in its finest form. The author is a favorite of mine and now I can’t wait for the next installment! A RECKLESS MATCH is sexy, sassy and distinctly divine. Explosive!