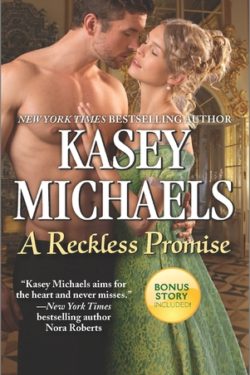 A RECKLESS PROMISE (THE LITTLE SEASON #3) is an historical romance set in France and England in the early 1800’s that once again takes some liberties by putting Darby and Sadie Grace together over and over again without the use of a chaperone.  It was nice to be reunited with characters I’ve met in her first book in the series as well as new characters.

Michaels’ A RECKLESS PROMISE is Darby and Sadie Grace’s story along with her niece Marley who becomes Darby’s ward after the death of her father.  There is a lightheartedness to the story but also some darkness due to secrets being kept, Darby and Sadie Grace’s upbringings, the curse on the Duke and some evil characters.  There is instant attraction between Darby, a Viscount, and Sadie Grace, a commoner, even though he doesn’t fully believe her story of why she’s at his cottage with Marley at the request of Marley’s father, a war buddy, who was injured during the war while in France as he was as well.  He knows there are pieces of the story that she’s leaving out but he’s willing to give her time to tell him the true facts.  When they are finally comfortable around each other we get to know their secrets a little at a time which is eating at both of them.  They are good for each other and don’t have a cold relationship like others in the ton.  Watching their interactions as well as those between their friends gave a liveliness to the story.  I could tell how much their friendships meant to each of them and that they truly cared for each other.

There are family and friends, dogs, birds, titled people of the ton, servants, secrets, illness, tears, laughter, happiness, twists and turns, lots of loving and love. The prologue set in France during the war sets the stage and the epilogue set in England wraps things up the story and gives me the closure I was hoping for along with some happily ever afters.

Michaels is a fairly new to me author only having read MUCH ADO ABOUT ROGUES (BLACKTHORN BROTHERS, #3) and the first book in this series, AN IMPROPER ARRANGEMENT.  I somehow missed the second book in the series, A SCANDALOUS PROPOSAL and I plan to rectify that.  I do look forward to reading more of her books since historical romance is one of my favorite genres.