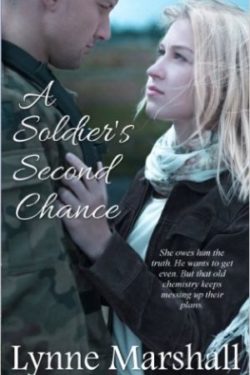 A SOLDIER’S SECOND CHANCE by Lynne Marshall had a lot of angst due to Beck and January’s history that we learn a little at a time. She broke up with him thirteen years before, after Beck left for the Army, and he never knew the real reason why she didn’t wait for him, especially since they had talked about it and their love for each other. Will he find out the reason now that their paths have unexpectedly crossed again?

Beck is all alpha male. He’s on the LAPD SWAT team, is a Special Forces trained medic, is in the National Guard, and is getting a skills refresher course at the hospital where his girlfriend of thirteen years ago works–unbeknownst to him. January, or Jan, as she’s known, is his long lost love and a nurse in the Emergency Department. She’s harboring a huge secret–one that can wreck Beck’s world and make him hate her more than he already does. Jan tries to avoid him as much as she can, but since she’s doing a lot of his training, how successful can that be? A lot of the action takes place in the emergency department of the hospital with lots of traumas and split-second decisions along with a fast pace and lots of medical terms.

Watching how they each hurt but don’t know how to communicate about their pasts and their feelings was heartbreaking. Jan wanted to break her silence but didn’t want Beck to hate her even more, since they started to connect again. They still have chemistry and a connection even years later. Is she just being selfish? Beck is full of anger and knows Jan isn’t telling him everything and seeks revenge. They go through a myriad of emotions–as did I!  I could feel the anger, the hurt, the love, the fear and sadness, and eventually the happiness when the truth is revealed and Beck works through his resentment. There are  twists and turns in this story filled with friends and family and coworkers. Wisdom is shared, connections made, and memories come to the surface along with nice closure and a happily ever after I was hoping for but didn’t expect.

Lynne Marshall is a new to me author and I will be adding some of her other books to my always growing TBR pile!