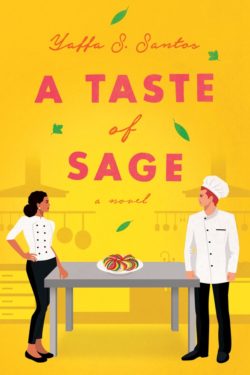 A TASTE OF SAGE is an eye-opening, savory romance with flair. It stars an incredibly talented lady, Lumi Santana who is gifted with synesthesia, the ability to discern a person’s emotions from their cooking. So, Lumi rarely eats out. Lumi’s mother raised her and taught her not to trust men, alluding to her nonexistent father. Sadly, Lumi is batting zero in the romance department. She decides to open a restaurant with an eclectic Dominican cuisine, but it proves costly with bills galore, so she closes down. Lumi is heartbroken but she rallies around and applies at an upscale French restaurant, owned by Julien Dax, who is notorious for his critical personality, to make ends meet. How will things pan out working with the sarcastic, saucy chef?

Julien Dax, a successful, suave restaurateur, is captivated by the lovely Lumi, but his acerbic tongue doesn’t win him many friends. Case in point, Lumi steers clear of Julien, avoiding conversation as much as possible. However, Julien is known for his culinary masterpieces and the aromatic smells wafting from his cooking is very tempting. Lumi sternly tells herself to avoid sampling his dishes. However, dish after dish tickles her senses and she finally succumbs, secretly savoring one of Julien’s creations.

Oh my gosh! Heaven help her, as emotions flood her being. Lumi will never be the same after that one bite and craves his fancy French food. Then the unthinkable happens, she develops intense feelings towards Julien. This is going to mess up her goal of saving money, moving on and maybe opening her own business. Also, Julien is falling hard for the foxy lady and his whole outlook on life seems sunny now with Lumi in it. He intends to tell her how much he loves her. But then a disastrous accident happens. Does it derail everything? Will Julien and Lumi’s relationship mushroom into something even deeper?

A TASTE OF SAGE is a culinary masterpiece of emotions, delicious recipes, romance, hidden agendas and more. An unlikely romance, passionate overtures, conflict and many surprises await the reader in Ms. Santos’ brilliant novel. Lumi and Julien are a smitten couple who create fireworks in and out of the kitchen. Ms. Santos’ unique tale is exquisitely filled with luscious recipes the reader can try. I got pretty hungry while reading this! The story is an enjoyable salsa dance through the world of food and romantic appetizers. A TOUCH OF SAGE definitely is drama a la mode with a side of heat, heart and humor!