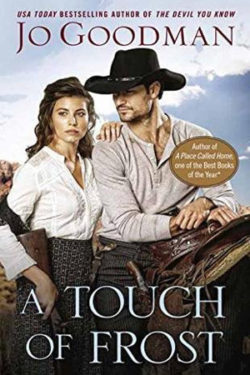 A TOUCH OF FROST by Jo Goodman is the perfect example how to allow your characters to reveal themselves through their actions. No overdone descriptions or backstories, just hints as the characters show the reader who they are, keeping enough secrets to make you crave more. As usual, Goodman had me riveted.

Phoebe Apple is traveling by train to visit her sister and her new husband in Colorado when her train is stopped abruptly. Phoebe is taken hostage when she shoots one of the bandits during the robbery. Remington Frost was sent by his father to watch over Phoebe. Injured when the train jumped the tracks, Remington is more than alarmed that he was unconscious during Phoebe’s abduction. Lucky for Remington, Phoebe is clever enough to leave a trail of evidence leading to her rescue.

Rescuing Phoebe is his duty but falling in love with her is inevitable. Will either of them survive the ultimate betrayal when it’s discovered?

Jo Goodman is my favorite historical western romance writer. Her books enchant, make me laugh, and then make me sad when I turn the last page. A TOUCH OF FROST ambled, then was crazy exciting, then funny until it started to mosey along again, then so stimulating that I rushed and smiled like a Cheshire cat at the end. Amble and mosey may sound strange and uninteresting but that’s the beauty of this book. It fits westerns. Goodman can write about paint drying and I’d probably find a reason to laugh or keep reading. It’s during those fake lulls that I delighted in her characterization. It’s soothing and charming the way she pushes her characters in the direction of forever love, always keeping the reader entertained.

By halfway through this novel, I was completely satisfied with the progression, but insanely curious how Goodman would rope me in for the rest of the story. It seemed as if we’d reached a semi-conclusion, if you consider the path of most romances. But, oh we are so fooled by this when the plot unravels, becomes a bit clearer, then forced me to race to the end and smile like a sap with happiness. I should have known better. Amble and mosey meets riveting and laughter. Amazing!

I could probably end this review here and have said enough, but I must wax on a bit more about why I love this story.

A TOUCH OF FROST is the perfect western for romantics. It has grit, spunk, and a lawlessness you’ll appreciate. There is justice, but not quite the way you’ll expect, which makes this story and the characters even more charming. Even Fiona, Phoebe’s sister, who is the spoiled actress turned rancher’s wife, became likable in the end.

I could read Jo Goodman’s books as a monthly diet, and should probably do that to I catch up on her backlist. I love her style of historical western romance. There’s always a quirky character or two. This time, I was afraid they were missing, but laughed out loud when I found them. There’s a harmonization to Jo Goodman’s name; she knows how to portray a “good man”. Remington is quite the hero and Phoebe meets him toe-to-toe.

Jo Goodman’s books are pure entertainment. I want to rush to the end to see what happens, but then I’m mad at myself because I finished too soon without savoring. A TOUCH OF FROST feels like a meaty book, just like historicals should be. What’s amazing is that it doesn’t feel overly descriptive, or lacking in any way, projecting a sense that I know the setting and characters without effort. It’s also very sexy in places and not always behind closed doors, although there is some of that so it’s not repetitive. Even if sexy isn’t your thing, the characters are so darn cute together that you can’t resist them, even when you disagree with them.

If you’ve read this far, you already know I highly recommend this book. Even non-historical fans will find the characters and setting relatable. It’s the late 1800s, so it’s modern enough to draw in a contemporary western romance reader. Take a trip back to the wild west, round up a few outlaws and fall in love in A TOUCH OF FROST.