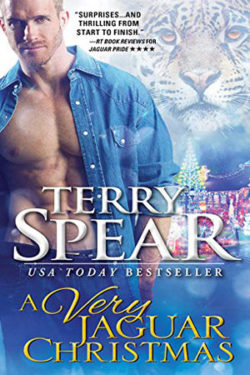 A year ago, JAG agent Everett Anderson lost his best friend, a fellow agent, during a mission. His friend asked him to watch over his girlfriend Demetria. Everett fell for Demetria the first time he saw her, but she was dating Matt so he stepped aside. He has not seen much of her since Matt’s death, but now he finds himself on the same assignment as the lovely agent. Everett is accustomed to handling dangerous poachers, wildlife trackers and the like, but when his mother’s daycare suddenly discovers a wolf cub among the jaguar cubs, he is at a loss as to how to proceed. But he knows someone who is perfect for the job. So he asks that Demetria be assigned to the case. Like him, he knows that she will be astounded since none of the jaguars even knew wolf shifters exist.

It is Guardian agent Demetria MacFarlane’s duty to protect all of those of her kind, jaguar shifters, and she especially enjoys interacting with the young cubs. When she receives the call that a wolf cub has been found at the daycare, she believes Everett is pulling a prank on her, until he shows her a video of the cub shifting. Demetria has had feelings for Everett for some time, even before Matt, and she used to visit Everett’s sister often, hoping to get a glimpse of him. Even though she had cared for Matt, there was never the intense feeling for him that she holds for Everett.

With Christmas rapidly approaching, Everett and Demetria team up to find the cub’s parents, and spend day and night cub sitting the young wolf. Before long, the two relent to their passion for each other. Will Everett receive the gift of his dreams this Christmas? Will they be able to find the young cub’s parents in time for the holidays?

USA Today bestselling author Terry Spear’s latest novel, A VERY JAGUAR CHRISTMAS, the fifth in her JAGUAR SHIFTERS series, is sure to captivate fans of paranormal and urban fantasy romance. Everett and Demetria have been interested in each other for quite a while, but since Matthew’s death, they haven’t had much contact. When this case brings them together again, all their old feelings for each other rise to the forefront. As they make the discovery that wolf shifters really exist, the excitement escalates as they are forced to stay together, caring for the young cub and searching for his parents. But each has their own guilt concerning Matthew which they will need to overcome if they are to have a future together.

Loss, shifters, Christmas, stunning discoveries, passion, tender romance, healing, second chances and true love combine for a heartwarming tale that is sure to touch the hearts of its readers. There are many endearing moments with the young cub that will delight readers and provide several laugh-out-loud moments. As a huge fan of Ms. Spear’s novels, I always look forward to one of her new releases and I am never disappointed. This one is no exception. This recommended read is sure to put you in the holiday mood in this special novel which brings together the jaguar and wolf shifters, combining two of her superb series. This is one you won’t want to miss!