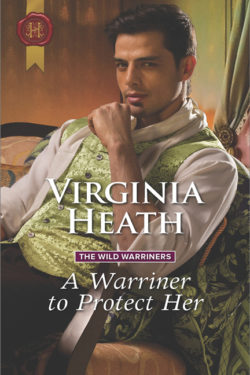 Virginia Heath is fast becoming one of my favorite historical romance authors. Her books are set in Regency England with the ton as well as down to earth characters that fight hard to right wrongs. There’s always action and adventure along with romance and love. Give her books a try if you haven’t already.

In A WARRINER TO PROTECT HER, Letty, also known as the Tea Heiress or Violet, is being kidnapped for her fortune but resists all she can. Both her uncle and the Earl who are abducting her have nothing but money and greed in their thoughts and couldn’t care less about Letty, which comes out loud and clear. When she escapes and is rescued hours later by Jack Warriner, things go from bad to worse…or does it?  He and his younger brothers do everything in their power to protect her and keep her safe at their dilapidated estate, on which they’re working hard to make improvements.

The interactions between Letty and Jack, Jamie, Joe and Jacob were fraught with tension but also affection and sometimes even playfulness. Jack is always on his guard since he has a fear that his family’s reputation will damage Letty. But he’s also her fiercest protector and tries to downplay any feelings he has for her. There are some lighthearted moments that are often overshadowed by the need to protect Letty from the men that are looking for her. All Letty has to do is make it to age 21, but will she? The countdown to her birthday added another layer of anxiety to her and the Warriners especially since they all weren’t always on the same page.

The characters are well developed, and we get a sense of their personality. The story flowed smoothly, and there was nice closure and a happily ever after at the end. There are wonderful descriptions of the house, the farm, and the animals, and I felt that I was there. I like that this is the first book in the series, so we’ll be able to get to know each of the Warriner brothers better in the books to come. I for one can’t wait!