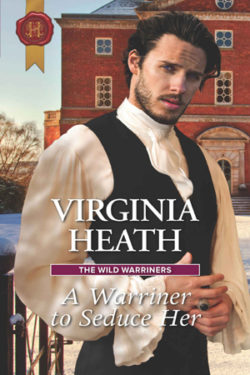 A WARRINER TO SEDUCE HER is the fourth and last book in THE WILD WARRINERS series.  I’m sad to see it end since each of the Warriner brothers has a part in each of the books. This is Jake’s story and is a five-star read, not only because of the story but also how loose ends were tied up. There was nice closure for all the Warriner brothers.  With seventeen children between them, and counting, it would be nice to catch up again with them in a holiday novella (hint, hint).

The prologue sets the stage and is set almost twenty years before the story takes place.  What secrets from his past have helped to shape him?  Jake has always been a rake and hasn’t kept up much with his family since leaving university.  They don’t really know what he even does for a living.  When he’s needed to seduce Felicity, or Fliss as she likes to be called, to get closer to her uncle who she’s never had a relationship with before, things aren’t always what they seem – or are they?  Her great aunts, who are to be her chaperones, are a hoot. I never knew what would come out of their mouths next. But will they take their role seriously? There’s chemistry between Jake and Fliss the moment they unexpectedly meet but he has secrets and she’s not privy to them.  Their paths keep crossing and is it intentional and if so, to what end? Is Jake the protector Fliss believes he is?

There is a depth to the characters I wasn’t expecting especially given Jake’s reputation with the ladies.  There are a lot of twists and turns but every action builds upon another.  Good versus evil plays a part and there’s some ugliness as a result.  There are family and friends, the ton, dances, long chats, lies, secrets, danger, evil, hurt, sadness, anger, tears, love, loving, and ultimately happiness.  There is wonderful closure with all the Warriners, their spouses and children playing a role. There are happily-ever-afters and the epilogue had me going ah!

Ms. Heath has fast become one of my favorite authors of historical romances.  I look forward to reading whatever she pens next.  I know I won’t be disappointed!