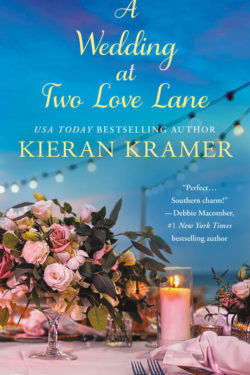 A Wedding at Two Love Lane by Kieran Kramer is an interesting story that begins with a charity auction and continues on its merry way to a very unusual but satisfactory conclusion. The story opens with Greer Jones speaking with her mother about a wedding that never happened because Greer decided she didn’t want to marry her fiancé after all. Greer moved away from her hometown and moved to Charleston, SC. Now she is working with two friends who are also her partners in a matchmaking business. She also has a hidden obsession with planning her perfect wedding! Greer is on her way to attend a charity auction as a representative of her company. At the auction she tries to win a wedding gown, with a history, and is outbid by her nemesis Pierre, who bid up the price. It seems that Pierre is one of Two Love Lane’s failures. Now the fun begins as Pierre is going to raffle off the dress to a wedding couple and Greer wants to be part of the action with no wedding prospect in sight. Now mix in Greer’s ex and his new fiancée, a strange man with a British accent who knows Greer’s ex, a few other wedding couples and a contest, instead of a raffle, and the fun begins. There’s lots of interesting stuff happening and the storyline moves along nicely. I really enjoyed reading this book.