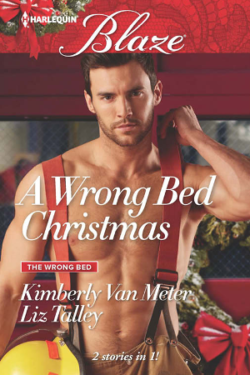 A WRONG BED CHRISTMAS in the WRONG BED SERIES has two connected novellas written by two different authors.  They both are set at Christmas with best friend firefighters, Erik and Layton along with Erik’s sister, Alexis, and her best friend, Emma. These are steamy romances that have the characters spending a fair amount of time in bed.  Van Meter is an author that I’ve read A CAUSE FOR JUSTICE previously while Talley is a new to me author. I will look for other books written by them to read sometime in the future.

IGNITED starts off with a bang when Erik and Layton decide to crash at his house after fighting a fire when they should have already been off duty.  The streets are icing up due to a storm but that’s nothing to what they will find when they get to bed that night since Alexis hadn’t vacated the premises like Erik had expected and her friend Emma is with her to boot!

The anger spewed at Layton by Alexis keeps getting worse the more her brother and even Emma try to placate her.  When Alexis can’t go to Emma’s parent’s house the next day due to the sprained ankle she gets when chasing Layton out of her bed, Erik is recruited to go with Emma.  When it’s just Layton and Alexis alone at Erik’s their attraction comes to a head and it’s steamy scene after steamy scene in between a few more domesticated activities.  There are a lot of layers to both Layton and Alexis but we only seem to scratch their surface and don’t get the full effect of what makes them tick. There is nowhere near enough closure and an epilogue would have been a nice touch.

WHERE THERE’S SMOKE by Liz Talley

WHERE THERE’S SMOKE is Emma and Erik’s story and what happens to them due to inclement weather and poor judgement on the way to her parent’s house.  I didn’t like that Talley gave a lot of the background that we had just read in IGNITED especially since some of it was written word for word.   They’ve known each other practically all their lives but she’s always been his sister’s friend and there were never any sparks between them or was there?  When they’re stranded due to the weather they each get to see another side of the other and like what they see.  But will they act on it since Emma is his sister’s best friend and Erik is Alexis’ brother?

There are burn up the sheet moments that neither seemed to expect.  Watching them deal with their insecurity of what they are getting involved in was heartbreaking especially when they were each scared to tell the other how they feel.  There was the potential for a happily ever after in the future but will it happen?  An epilogue would have given me the closure I was expecting and hoping for.