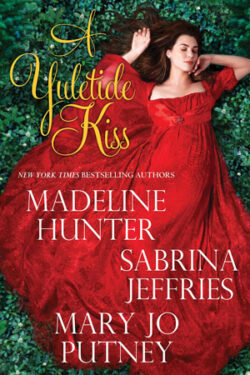 Each story in this anthology takes place in a certain rural tavern during a bad winter storm at Christmas.  I like how all three authors put their own spin on the same scene, yet they wrote it in the view of their own characters.

Sabrina Jeffries is the sole reason why I picked up this anthology. I normally do not read holiday-themed anthologies or stories. However, I am a big fan of this author’s DUKE DYNASTY series.

WHEN WE FINALLY KISS GOOD-NIGHT by Sabrina Jeffries

Konrad Juncker is a well-known playwright. He carries a secret that could blacklist him from the theater community. Bad weather strands Konrad at a secluded inn during Christmas. Fate gives him another chance to make amends to the one woman he never forgot. Can Konrad trust Flora with his biggest secret? Will he find a way to have a future with her?

Flora Younger is a paid companion to a viscountess. She secretly pins reviews on plays for a newspaper. Flora and her employer find themselves stuck at an understaffed inn during the holidays. Even worse, she discovers the blackguard who broke her heart there also. Can Flora trust Konrad with her heart again? Or will she throw caution to the wind to be with him?

Konrad is such a fun and naughty rascal! He made the series enjoyable to read. I like how Konrad never allowed his association with the Duke of Thornstock to turn his head. He enjoyed his brief stint in the limelight; however, a part of him disliked living in a lie. What I adore the most about Konrad is his altruism towards Flora. He did not want to start anything with her because he had no prospects to offer her.

Flora did not disappoint! She cared little about Konrad’s fame. Flora preferred the man beneath the façade. I like Flora’s work relationship with the viscountess. She knows the lady can be candid in her opinions, so she willingly plays mediator on her behalf. What I adore the most about Flora is her thoughtfulness towards the inn’s servants. She refused to subject them to her questionable baking skills, especially during the holidays.

WHEN WE FINALLY KISS GOOD-NIGHT is book 4.5 in Suzanne Enoch’s historical romance series, DUKE DYNASTY. This story is the reason I wanted to read this anthology. I have been intrigued by these two since their interaction in the fourth book, UNDERCOVER DUKE. Now I must get the SEDUCTION ON A SNOWY NIGHT anthology so I can read Heywood’s story.

Lucas Avonwood is the second son of a viscount. He works as an agent for The Home Office. Lucas follows a lead when he falls victim to bad weather and illness. Lucas comes to and finds himself being cared for by the inn’s attractive proprietress. Does Jenna have ties with Lucas’ suspect? Will that interfere in their budding romance?

Jenna Waverly owns and operates a respectable inn in a remote area. She closes her establishment for Christmas so her employees can enjoy the holidays. Jenna finds her inn bombarded by an assortment of unexpected visitors. She never intended to fall for one of them. Will Jenna give her heart to Lucas?  Or will their time together be a pleasant interlude?

Lucas is such a knight-in-shing armor. He may be a viscount’s son, but he never once put on airs. I like how he does not vocalize his suspicions. Lucas prefers to obtain proof before making accusations. What I adore the most about Lucas is his desire to shield and protect Jenna. He did not want to spoil her Christmas with disappointing news.

Jenna steadily grew on me. I admire her decision to become a business owner. Jenna could have led a modest genteel life. Instead, she chose a path most of her peers would snub. What I like the most about Jenna is her consideration for her employees. She could have kept her inn open, but she closed it so they could spend the holidays with their families.

AN UNEXPECTED CHRISTMAS GIFT is a novella that can standalone. I did not sense it belongs to a series, though I could be mistaken. I am familiar with Madeline Hunter’s works. However, it has been years since I have read one.

Daniel Faringdon is a former solider. He returns to England to assume responsibility to the barony he inherited. Daniel is surprised to find a familiar face at an isolated inn during an icy snowstorm. The lady in question claims to be his lawful wife. Daniel proposes they give their marriage a chance. Can Daniel convince Kate away from her suitor? Or will he lose her forever?

Katherine “Kate” Macleod comes from a long line of prosperous Scottish merchants. She takes shelter at a rural inn to escape frigid weather. Kate never imagined she would once again see the solider who saved her. And married her. Now Kate must decide if she wants to stay married to him. Will Kate give Daniel a chance? Who will she choose? Daniel or Edmund?

Daniel is such a wonderful knight-in-tarnished-armor! He is an honorable man who tries to help whomever he can despite their status. I like that Daniel acknowledges and accepts his imperfections. He does not allow his past mistakes to break him. Instead, Daniel learns from them. What I love the most about Daniel is how he openly admires Kate’s eccentricities.  He is not intimidated by Kate’s independence, intelligence or business sense but supports them.

Kate is a stubborn and spunky woman who is comfortable in her own skin. She refuses to bow down to society’s expectations on a woman’s place and duty. I admire Kate’s determination to never be a damsel-in-distress again. She took measures to protect herself. What I like the most about Kate is her kindness to animals. She rescued a cat-in-need and selflessly adopted it.

WHEN STRANGERS MEET is a standalone novella by Mary Jo Putney. As with Madeline Hunter’s novella, I did not get the feeling that this story belonged to a series. I could be mistaken. This is my first time reading the author’s works. I have heard her name before, just never got the chance to try her full-length books.

A YULETIDE KISS is a series of sweet and feel-good stories told in three different perspectives. I believe this is the first time I have read an anthology like this. I hope this is a new trend in anthologies because I found it so satisfying.