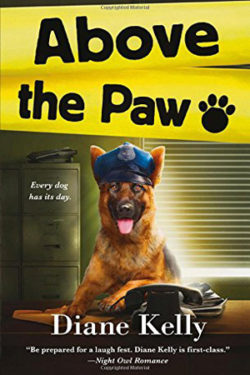 Perspiring and melting, Police Officer Megan Luz, a beautiful and tenacious lady, is patrolling a hot Fourth of July festival with her trusty sidekick, Brigit, K-9 clue sniffing extraordinaire. They are keeping the fair safe for all the attendees. Only evil lurks nearby…

When a girl collapses at the fair and hospital tests show she swallowed a drug known as “Molly”, Megan is hopping mad. How did the drugs get past her and Brigit? Her chief is livid at the turn of events and assigns her to undercover duties at a nearby college. Frustration and anger propel Megan to dig deeper into the drug trafficking world on the college campus. Megan’s keen sense and Brigit’s expert nose snuffle out clues. Only the Feds swoop in and steal the show. Oh, crap! Then, Megan’s previous law enforcement partner, prickly Derek, is accused of mishandling evidence. What next? With help from her hot, hunkalicious boyfriend, firefighter Seth, her police cohorts and friends, this conniving, cunning drug caper is going down! However, will Megan come out on top?

The risks are high, deception is king and the action is fierce in Diane Kelly’s new novel ABOVE THE PAW. Megan reprises her rip-roaring role as feisty, felon fighter Officer Luz, along with K-9 Brigit, super snooper. They team together to take down devious and dangerous drug dealers. Mucho action, edgy pacing and spirited, sassy dialogue pepper the plot. There’s plenty of intrigue, blackmail, bantering heroes and laugh-out-loud antics rounding out this spunky story that has enormous amounts of wacky moments, courtesy of klutzy Megan. The poor girl! Unpredictable predicaments always seem to hound her. Her previous, ornery cop partner is implicated in the case too. Does Megan uncover the wily drug dealers?  Will she probe unscathed? Thankfully, Seth offers some much-needed comfort in times of stress. Ms. Kelly delivers drama in spades in portraying realistic cop personas enmeshed in crime affairs. Top-notch stuff! ABOVE THE PAW is zippy and addictive, just like an irresistible rum punch!