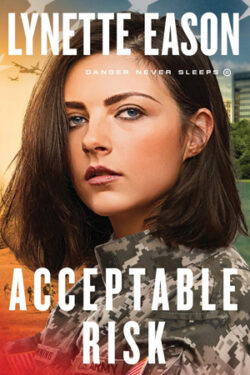 ACCEPTABLE RISK by Lynette Eason takes you on a roller-coaster ride that just will not slow down and let you off. Sarah Denning is an Army military journalist who is a guest speaker at a school in the Middle East. While there, she, with a group of young female students, is kidnapped. Her father is an Army Lieutenant General and, learning of her kidnapping, hires former Army Ranger, Gavin Black. Gavin has dated Sarah and has very strong feelings for her, complicating matters since he and his team are entrusted to extract her from her captors. During the extraction, Sarah is wounded and flown to a military hospital for treatment.

Sarah loves her job with the Army. She does not love her father interfering in her life. Her wounds were serious and while recovering in the hospital, she witnesses something strange. She hears a young woman in the next room begging for help. Even though Sarah is very ill, she gets out out of bed to try and help. However, when she later asks about the young woman, nobody seems to know whom she’s talking about.

Being a journalist, Sarah knows there’s a story and when she pursues it, it looks like someone is trying to harm her. With the help of Gavin, she begins the journey of trying to find out what’s going on.

This was such a fun read!  If you like puzzles, this is the story for you. There are so many twists and turns. Who are the good guys, who are the bad guys or was Sarah just out of her right mind? Lynette Eason creates intriguing characters and fast-paced, suspenseful plot-lines you can’t stop yourself from reading.  A great story by a great storyteller.