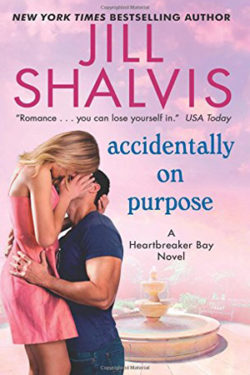 Elle Wheaten is living a life that she could be proud of living – a life she takes great pride in having created all on her own. She has a small circle of friends, a good job, and a small place she can call home. Elle has what she needs so she has no need to relive a past that is better off buried deep inside. However, the only man who can bring all those horrible memories to the surface is now working in the same building as her. Day after day she must work harder to tamp down those memories and she feels pretty successful at it. Elle has created the perfect wall, hidden behind a tough veneer of sarcasm and a topnotch wardrobe.

Archer Hunt runs an investigative and security firm in the same building as where Elle works. The plus side is Archer gets to keep an eye on her. The negative side is that Archer is faced with seeing her all the time. He has to see her with other guys, doing what he is longing to do, but cannot. Archer wants to be that guy, to keep her safe, to take care of her just as he did all those years ago when Elle was a broken-down teenager with a dysfunctional family. Finally having enough of just watching on the sidelines, Archer sets out to start tearing down the false wall Elle has built up by sabotaging her date nights. When Elle starts coming after him, he thinks he’s ready, but he’s unprepared to handle the adult Elle. He’s also unprepared for when she discovers he had a hand in the life she thought she had built entirely by herself.

Elle Wheaton has sharp edges which makes her character a perfect fit for the ex-police officer, Archer Hunt. The chemistry Jill Shalvis has built in ACCIDENTALLY ON PURPOSE is explosive and at the same time, creates a desire for empathy for both Elle and Archer. Jill Shalvis has also created side characters that contribute quite a bit to the story, making it special in that not only does every character play a role in the life of the two main characters, they also are characters we get acquainted with pretty intimately. By the end of the book, you’ll wonder, what’s next for these other characters in the book? I look forward to seeing if there will be a sequel to ACCIDENTALLY ON PURPOSE.