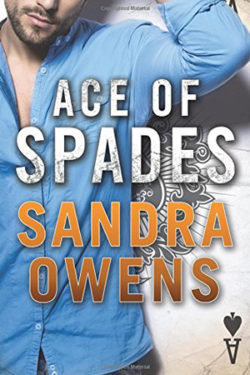 ACE OF SPADES is the 3rd book in the Aces & Eights series by Sandra Owens. This was my first time reading a book by Sandra Owens—and I was thoroughly impressed! ACE OF SPADES features Nick Gentry, an undercover FBI agent who grew up with an extremely abusive father, two younger brothers, who are also FBI undercover agents, and a Mom who walked out on them years before. Taylor Collins is the strikingly beautiful, yet fierce and independent FBI agent who has been assigned to solve a barbaric set of murders on escorts. Taylor and Nick are co-workers and best friends outside of their work with sizzling hot chemistry, but they both have been ignoring their feelings.

As more women show up murdered, the case becomes connected to Taylor’s past and future. Taylor’s mother, an escort, was murdered when she was a young child, and the murder scenes all feature women similar to Taylor’s physical appearance. Additionally, it becomes known the killer might be indeed stalking Taylor herself. Taylor must risk her own safety to finally put an end to the murders. Meanwhile, her relationship with Nick is developing throughout the investigation.

This is a romantic suspense stand-alone with an HEA. It has excellent plot twists and turns. This book kept me reading until I found out what was happening! The POV is 3rd person, switching back and forth between Taylor and Nick. ACE OF SPADES is a must read, and Sandra Owens is on my favorite author list now!