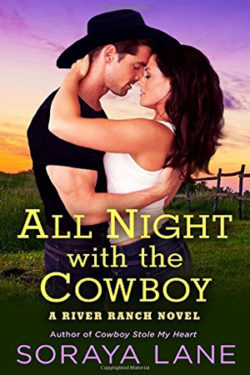 ALL NIGHT WITH THE COWBOY is the second book in the RIVER RANCH series and it was an enjoyable read. There were highs and lows in this second chance romance. Anger festered from twelve years before, when Lauren broke off with Tanner before she went off to college. She had her reasons but didn’t clue him in at all. Tanner didn’t see it coming, and neither have forgotten the other despite the years between them. They were each other’s first loves. But will they also be their last?

There were a lot of emotions involved in this story. When Tanner is severely injured after a bull riding accident in the rodeo, he doesn’t see it as the end of his career even though others do–with the exception of his younger sister, Mia. Enter Lauren, who is a physical therapist with a professional baseball team but is taking time off during the team’s off-season.

Lauren plans a much needed vacation in Fiji. Then Mia asks her to help her brother  and sweetens the pot. Tanner will go with her to Fiji so she can still take her vacation, and Mia’s family will upgrade her resort and fly her in on their private jet. Mia builds each up to the other, but they have their doubts when they finally meet on the plane and wonder what they’re doing. Until they can clear the air of the problems between them, it’s hard for them to work together.

Since Tanner and Lauren don’t communicate well, they’re sometimes left in doubt of what the other is thinking or saying.The story is filled with a present romance and a past full of hurt and regret.

There were twists and turns to the story and a nice flow, except when flashbacks sometimes made the story a little choppy. The vivid descriptions of Fiji and the islands made me feel like I was there, as did the depiction of the rodeo and Tanner’s family’s ranch. The prologue set the stage, and the epilogue tied up loose ends and gave better closure than I thought there would be, along with a few unexpected surprises.

Lane is a new-to-me author, and I will be back for more. Not having read the first book in the series, COWBOY STOLE MY HEART, was not as much as a detriment as I expected. I hope there will be more books in this series as well.