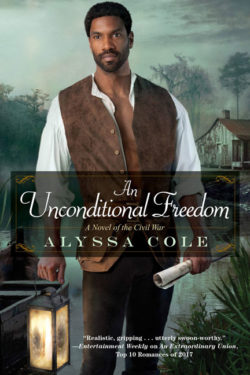 AN UNCONDITIONAL FREEDOM by Alyssa Cole is a difficult and inspiring story about racism within American history. The emotion, fear, sadness, and hope for the future shines brilliantly in a novel that’s not always easy to read, even though everyone should.

Author Alyssa Cole emotionally illustrates the American Civil War through pain and aggression from a free man’s point of view, after he unjustly experiences slavery first-hand. This character’s story brought forth my emotion regarding the lack of equality – in history and currently. Everyone should read this series and think about how they can assist pushing this evil out of our lives.

Daniel Cumberland’s slave experiences made him a hard-core detective with the Loyal League, seeking vengeance against the Confederacy. He teams up with a green recruit from Cuba who proves repeatedly that she can take care of herself. Janeta Sanchez has secrets, but will she realize in time where her heart and allegiance truly lie?

This isn’t an easy story to read, especially after reading the author’s note at the end. I empathize. This had to be an extremely difficult book to write. Depth of feeling enters into my reading, especially considering the injustices during the Civil War.

That so much prejudice still exists today is frustrating. I just hope that we can rally together to make this world function without color influencing it. That we see each other as a beautiful blend of people who can work together for a better future.

Daniel and Janeta’s future, as well as other key characters’, isn’t clearly explained at the end, which is the only part of this book that disappoints me. The end suits the story, but I became so attached to the characters that I wanted more. Dare I hope for a sequel?

It’s not a fluffy romance ending, which I do love, but that would be unrealistic. It’s romantic, but it’s not tied up in a neat bow. This book represents truth, which may not always be pretty or what we want, but it’s good to be reminded that the fight for equality isn’t over. We need that fresh in our minds so we’ll treat others as the beautiful ethnicity that they are.

Even though this book built slowly for me, and the characters rehashed their issues a bit too much for my preference, I wouldn’t miss the climatic end to this series. I’m sad to see it end, and hope the author reconsiders adding to it.

If you love American history, Alyssa Cole’s The Loyal League series is a must read. She writes with an authenticity, while mixing in unexpected nuances never before experienced fictionally in this time period. It’s gutsy, with female leads who inspire. I would love several more books to follow these characters’ journeys, as well as those of their descendants.