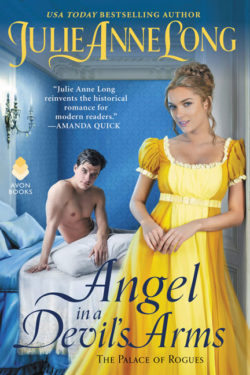 Angelique Breedlove is a fallen woman. Raised by a respectable family, she still made poor choices as a young woman. She was used by two different men who promised marriage and love but were not sincere.

After being disowned by her family, she becomes the mistress to Lord Derring. When he dies, she meets his wife at the lawyer’s office. Angelique has been given some money, and Lord Derring’s wife has been willed the Palace of Rogues, a rundown boarding house near the wharf. Both the ladies had been treated poorly by Lord Derring. They develop a friendship and, together, they remodel it. Angelique is now happy as co-owner of the boardinghouse. She makes herself a promise to never be used or mistreated by a man. Love, or the promise of love, is not for her.

Lucien Durand, Lord Bolt, illegitimate son of the Duke of Brexford, was treated well by the Duke. He was made a viscount, had a stellar education, and belonged to White’s men’s club. The Duke decides to marry and his new duchess insists the Duke disavow Lucien and his mother. Lucien’s mother dies of heartbreak.

Lucien is thought to have drowned in the Thames after a night of drinking. Ten years pass and he’s back. He’s out for revenge on whoever it was that attacked him on the waterfront and threw him into the river.

He takes a room at Angelique’s boardinghouse to be close to where he was “murdered.”  Lucien is a man bent on revenge, angry and standoffish. Angelique has vowed not to let another man close to her heart. They begin this dance of love and trust. There are intense love scenes and lots of hot interludes.

ANGEL IN A DEVIL’S ARMS has a great plot, hot romance and humor. I highly recommend this book.