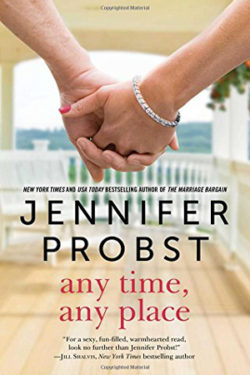 In ANY TIME, ANY PLACE by Jennifer Probst, Dalton Pierce is in lust. While visiting a local bar, he sees a woman who heats his blood in a way he hasn’t experienced in a long time. He can’t help but visit the bar every night, hoping to get her attention and make his move. The object of his desire is Raven, the owner and bartender who, through hard work, has turned the bar from a dive into an amazing place to eat great food and enjoy good company. Raven is a mixologist and loves creating unusual combinations of drinks her customers can’t wait to taste. Her goal is to make her business successful, and she does not want or need to get mixed up with a man right now.

Dalton’s passion is creating beautiful pieces of furniture from wood. He loves Raven’s bar and more than anything, he wants to refurbish it to its original glory. If he can get her to agree to let him help, he knows it will only be a matter of time until he can get her in his bed.

Raven has a secret. Dalton doesn’t know who she is. Her father was running off with Dalton’s mother when they were involved in a horrible car crash resulting in both of their deaths. Afterward, her father’s reputation was deliberately destroyed by the Pierce family and their friends. Her father was totally blamed for what happened, and nobody seemed to care about what their comments would mean to the little girl he left behind. While Raven is attracted to Dalton, she wants revenge against his family who destroyed her life.

As the paths of these two people intertwine, the attraction between Raven and Dalton ignites quickly and swiftly grows. Raven knows she needs to tell Dalton it was her father his mother was running away with. Will he forgive her for not telling him the truth from the beginning? Can Dalton believe that Raven truly loves him and is not just seeking revenge? Can he forgive his mother for her actions and trust the feelings he now has for Raven as being real?

ANY TIME, ANY PLACE is a wonderful story by Jennifer Probst that shows people how complicated love is. This is a funny but heart-warming story.