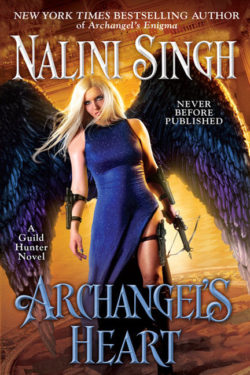 ARCHANGEL’S HEART is book nine in Nalini Singh’s popular paranormal series, GUILD HUNTERS. As much as I love and enjoy this series, sadly, there are a couple of books I have not yet read. That, however, did not hinder my ability to follow this story’s plot.

Raphael is the Archangel of New York. He and the Cadre of Ten receive strange and unpredicted summons from the Luminata to meet at their stronghold. Raphael worries about his consort’s welfare while in close proximity to the Cadre, however he encourages Elena to research her family’s background. Leaving Elena to explore the compound, he and the Cadre discuss the prominent problem with the deranged Lijuan, Archangel of China. Raphael accepts and shares Elena’s perceptions on the Luminata and their stronghold. He and Elena expose the sect’s darkest of secrets, information the Luminata did not want the outside world to know.

Elena Deveraux is a Guild Hunter turned angel-kind, the first in creation. She accepts the current peace in the world as tentative and fleeting. Elena accompanies her Archangel lover Raphael to Morocco to attend an unexpected summons from the Luminata, a sect of angels seeking enlightenment. She takes advantage of their impromptu visit to Morocco to research her mother’s unknown lineage. Elena’s hunter senses pick up on strange and dangerous undercurrents at Luminata’s compound. Much to her surprise, Luminata and some of its occupants, hold important clues to Elena’s ancestors.

For an Archangel, Raphael too has grown considerably since the first book. He is no longer the cold and aloof angel I remember but an approachable and playful one. I love how Elena grounds Raphael, humanizing him and teaching him that there is a broader outlook on life and the world than his jaded angel perspective. What I adore the most about Raphael is despite his worries and concerns about Elena’s welfare, he never once curtails her actions unless it jeopardizes her health.

I have always admired and adored Elena’s character since book one, ARCHANGEL’S BLOOD. She is the very definition of what I like the heroines I read to be: strong but far from perfect, sticks to her convictions, and frank about speaking her opinions. I love Elena’s steady growth since her ascent into angelhood. She may be an angel and consort to a powerful Archangel, however, Elena never ignores nor forgets her humanity. I also admire the respect Elena shows to Aodhan and Illium by not digging into their individual pasts; instead, she patiently waits for the two angels to entrust her with the information.

What I love most about ARCHANGEL’S HEART is that my two favorite angels, Illium and Aodhan, play important roles in the story. I like that the author is giving tidbits into both angels’ backgrounds, satisfying my curiosity and craving about them.

ARCHANGEL’S HEART is a riveting continuation of Elena and Raphael’s exploits. Nalini Singh never fails to beguile me with her dynamic characters and awe-inspiring world building. I always anticipate losing myself in whatever she writes, be it GUILD HUNTERS or PSY-CHANGELING series. I hope the author considers writing about either Illium or Aodhan for future books, simply to satisfy my insatiable greed for both angels.