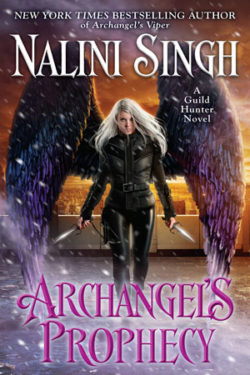 Raphael is the Archangel of the territory surrounding New York City. He worries over his consort’s continual decline. The Cascade promises cataclysmic changes, yet Raphael and Elena refuse to conform to its commands. What does the Cascade have in store for Raphael and Elena? Can he find a way to reverse Elena’s strange regression?

Guild Hunter Elena Deveraux is the first angel-made in eons. She hears an ancient, feminine voice heralding her death. Strange phenomenon signal the start of the Cascade. Elena ignores all the portents of doom to investigate her brother-in-law’s attack. Can Elena find the one who assaulted her brother-in-law before her health deteriorates further? Will she thwart the Cascade’s plans?

I like the fact that both Raphael and Elena are experiencing changes. It is not one-sided. I adore how they deal with the changes as a solid unit instead of handling them by themselves. I love how Raphael can anticipate Elena’s concerns and fears, so once they manifest, he can ease them. But, what I admire the most about Raphael is how he does not try to coddle or smother Elena despite his concerns over her declining health. Rather, he prefers Elena to be her warrior-self up until the end.

I have always liked and enjoyed Elena’s snarky, tough-as-nails personality. This book shows her vulnerable side. I like how Elena ignores her regression; instead, she puts all her focus on solving the case involving her brother-in-law. I adore the fact that she keeps no secrets from her Archangel. That whenever something happens, she tells him personally. But what I like the most about Elena is that she understands why Raphael is backsliding into his former ways and not reprimanding him for it. She knows it is Raphael’s fear causing him to behave that way.

ARCHANGEL’S PROPHECY is book eleven in Nalini Singh’s paranormal romance series, GUILD HUNTER. Sadly, I am three books behind in the series, namely the recent ones about Raphael’s Seven, so some events mentioned I was clueless about. I seriously need to rectify that soon to understand the plot’s full scope. Much to my disappointment, Aodhan does not make an appearance in this installment, just repeatedly mentioned. I never realized just how much I missed him and Ilium until this story.

ARCHANGEL’S PROPHECY is a gripping tale about a dynamic couple determination to thumb their nose at fate and write their own future. I cannot wait to see what’s next for Elena and Raphael. Also, I hope either Ilium or Aodhan’s book is next.