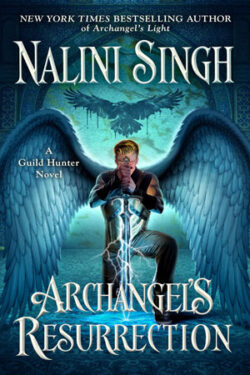 Zanaya, Queen of the Nile, is an Ancient Archangel. She refuses to follow in her parents’ footsteps. Then Zanaya sees Alexander. They find themselves trapped in an unending cycle of fierce passion and painful separation, neither willing to compromise. Zanaya wakes prematurely from Sleep to help fight an insane Archangel intent on destroying the world. However, she does not escape the battle unscathed. Will this change affect Zanaya’s relationship with Alexander? Can they make their love work this last final time?

Alexander, Archangel of Persia, is known for his battle tactics. There has only been one woman forever in his heart, and that woman is Zanaya. Their tempestuous love locks them into a continuous on and off loop, neither inclined to concede to the other. Alexander has never forgiven Zanaya for abandoning him to Sleep. However, Lijuan’s threat against humanity and the Cascade brings his lover back to him. But for how long? Can Alexander and Zanaya break their eons cycle to be together? And at what cost?

I had a tough time connecting with Zanaya. Generally, she is everything I like in a heroine: smart, driven, and able to hold her own. Throughout the book, she proves she did not need a male to complete her. However, Zanaya’s refusal to compromise or bend a little irked me. I understand that she did not have good role models when it comes to romance and relationships. Her parents’ unhealthy and dysfunctional time together skewed her outlook on them. What I like about Zanaya is that she acknowledged half the blame for her and Alexander’s flawed relationship. She knew they had problems, yet she just did not know how they could overcome them.

I am still on the fence about Alexander. There were times when I just could not connect with him, and then he would do something that endeared me. I feel the bulk of Alexander and Zanaya’s relationship problems stems from their inability to yield when the situation calls for it.  They are too strong-willed and set in their ways. I adore how Alexander did not want to impede or influence Zanaya’s growth. He waited patiently for her to become the angel she was meant to be before entering into a relationship. What I love the most about Alexander is his stance on children. He believes children, angels and humans alike, were off limits.

ARCHANGEL’S RESURRECTION is the fifteenth book in Nalini Singh’s popular paranormal romance series, GUILD HUNTER. I have been a fan of this series for years now; however, this book did not grab me as the others had. I like how the author is branching away from the main couple (Raphael and Elena) to tell other characters’ stories. My main problem is that neither Alexander nor Zanaya left much of an impression on me from the previous books. I did like that Raphael and Elena made appearances in the latter half of the book.

I like how Nalini Singh broke the story into parts. The first half involves Alexander and Zanaya’s beginnings, before they became archangels. Another section revolves around the Cascade, telling the events from another perspective. The last part focuses on the aftermath from the Cascade and Lijuan’s demise. It explains how the world and people are adjusting.

ARCHANGEL’S RESURRECTION is a fascinating tale of two obstinate archangels’ last chance at love. I am curious about which characters Nalini Singh plans to write next. I cannot wait to see what is next in her GUILD HUNTER world.