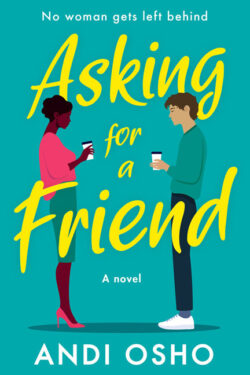 ASKING FOR A FRIEND is bright, fresh and tells the complete truth about falling in love. The story stars three best friends Jemima, Meagan and Simi. Meagan is determined to stick to her five step plan but is it her undoing? Jemima has an ex that won’t leave her alone, but a handsome stranger piques her interest. Simi’s love life is more down than up, with men leaving her heartbroken. Simi just had another bad breakup. Jemima and Meagan help her out. While the three of them commiserate over their dates or lack there of, they decide that the reason they are failing at relationships is because they are finding the wrong men for themselves. So, they vote to choose for each other. Will they succeed?

After time, the three friends discover that the problem isn’t the men, but they are heading into relationships without the, it, factor. Plus, it’s affected their own lives, their friendship and their jobs as well. Will they work through their emotional landmines and regrets, before it bombs their sisterhood bond?

ASKING FOR A FRIEND is a heartfelt, indulgent story that is equally amusing and empowering. Ms. Osho delves deep into the minds of three friends and their messed up lives. The author expertly weaves a beautiful novel with a likable cast and a pleasing love story at its heart. There are many humorous moments that lighten up a rather dramatic plot. The story combines powerful women, witty dialogue, sexy situations, and unexpected predicaments that make you laugh at the inanities of life. I was quite impressed with Ms. Osho’s ability to nail the true sentiments of love in all its forms isn’t perfect. You have to give of yourself to any situation, to make a relationship work. I laughed and cried as Meagan, Jemima and Simi all discovered themselves and what it takes to find real love. ASKING FOR A FRIEND is gossipy but with sharp edges. True girl power!