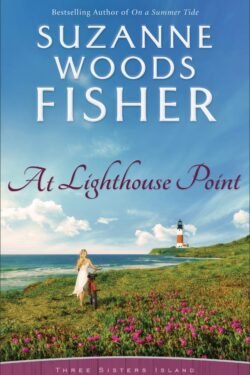 Incredibly touching and inspiring, AT LIGHTHOUSE POINT, boasts a dramatic conclusion in the Three Sisters Island Series. Blaine Grayson has a culinary degree tucked under her belt, while she studied in Paris, and graduated from the Le Cordon Bleu culinary school. She travels back to Three Sisters Island along with her best friend, Jean-Paul, who is finding his own career path in life, with dreams of turning her family-owned business, Kicking Moose Camp and Moose Manor, into a top-notch resort. However, she gets the shock of her life to see Moose Manor’s newly remodeled kitchen doesn’t meet legal guide lines as a commercial kitchen. Can it be fixed?

Then, Blaine discovers that her close childhood friend, Artie Lotosky, is a doctor to the Maine islands. Her friend Artie is actually a doctor! She has a soft spot in her heart for him. However, they didn’t part amicably when she left for Paris. Oh boy, did she make an error by coming home?

Blaine discovers life rarely goes as planned. Jean-Paul charms her family but they wonder if she is going to marry him. After several misguided attempts at resurrecting her friendship with Artie, who stoically refuses her existence, she learns to open her heart to a new purpose for her future. Does her future include an incredibly handsome doctor friend?

Incredible friendships, loving family members and tender moments encapsulate Ms. Fisher’s breathtaking conclusion in her Three Sisters Island series. AT LIGHTHOUSE POINT is a winning combination of wonderful unexpected dreams. Loving family members, charismatic village characters and a little boy that charmed the pants off me! There are subplots galore that tie this whole incredible story together. This compassionate novel had me crying several times. Definitely keep Kleenex nearby! Ms. Fisher is a master at storytelling and this novel does not disappoint! This is quite possibly the best book in the series! AT LIGHTHOUSE POINT is a keeper for sure!