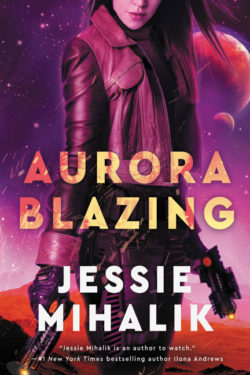 Bianca von Hasenberg is a daughter of a High House and the third child of six siblings. She was married off as a pawn in an arrangement by her father, and the experience changed her in unimaginable ways. Tragedy struck and made her a widow. Whispers that she may have had a hand in her husband’s death follow her.

Ian Bishop is the director of House von Hasenberg security and takes his role very seriously. He attained his position at a remarkably young age, and his peers are decades older. Several years earlier, he had been Bianca’s bodyguard and, during that time, coldly rebuffed her interest in a romantic relationship. Their relationship has been somewhat strained ever since.

When Bianca’s eldest brother, and heir to the house, appears to have been kidnapped, she is determined to find him and to bring him home. She goes against her controlling father’s wishes and leaves on her search. Of course, Ian has received orders to retrieve her.

This is the second book in The Consortium Rebellion trilogy. I love SciFi romance and was incredibly excited to come across the first in this series, POLARIS RISING. We were lightly introduced to Bianca and Ian in that installment and could tell that there was some uncomfortable history between them.

In AURORA BLAZING we get to see well beyond the surface regarding Bianca. She has survived a wretched marriage to a brilliant scientist who experimented on her without her consent. The results gave her an awesome ability but at potentially debilitating cost. This is an intelligent, honorable, and compassionate heroine who has been sorely tested and is slowly regaining her strength. The story is from her point of view, so we learn quite a bit about her struggles and uncertainties. It is, therefore, with great glee that I read of her episodes in outmaneuvering our hero.

Ian is seemingly less appreciative of Bianca’s tricks for the first half of the book. He is frowning, frustrated, and trying to restrain his ire over the heroine’s exploits. But her talents are slowly revealed to him, and forced proximity gives him the opportunity to truly see the woman behind the facade. Admittedly, I rather wished I could have had more insight into our hero. We were given few details into his dark past.

The action and adventure kept my attention. Detailed writing of virtual reality and hacking was fascinating. As was the world-building, with its vivid descriptions of places, hierarchy, and social pitfalls. The romance itself moved slowly, but with so much else to round out the story, I really couldn’t complain. In truth, AURORA BLAZING made me lament that I can only expect one more story, this being a trilogy.