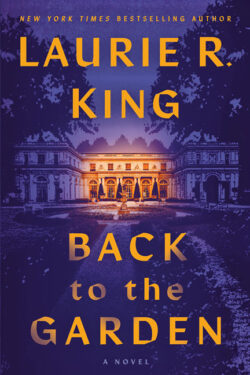 BACK TO THE GARDEN is a mystery that went back and forth in the telling of the story.  The chapters are labeled Then or Now. They take us back to the late 60’s and 70’s and then to the present day fifty years later. This is an interesting read, though it did have a few pacing problems that caused me to hesitate while reading. It was sometimes confusing to remember if we were in the past or the present. (Having grown up in that time period, a lot of things mentioned were familiar to me.)

The book begins with the prologue set in Oregon that introduces us to the past and the commune where Rob Gardener was living after returning from the Vietnam War (with little or no respect from his grandfather or others.) Little do the others on the commune realize he comes from money and a prominent family.  When the commune moves from Oregon to Rob’s family estate in California, the pace picks up. Many musicians and other figures of the time are featured in the story or mentioned. (It definitely brought back memories for me since I was born in the late 50’s.)

We are introduced to a multitude of characters, and it was often difficult to keep them straight. I initially liked Rob’s love interest, but she became too demanding and thought she held the real power. I didn’t like her treatment of Rob and how she tried to get him to think her way. Rob’s brother plays a more prominent role than I envisioned, though his cousin only had his own interests at heart. Throughout the telling of the story, the family lawyer seemed almost like a chameleon since he seemed to fit in no matter what was going on, often to Rob’s dismay. It was amazing how the commune operated smoothly for the most part and how many things they had going on.

The story had many twists and turns. There were carefree moments along with drug use, free love, children all over the place, and hard work. The story had a good flow for the most part but sometimes seemed choppy when going back and forth to the different time periods.

The Estate’s manager in the present day and the woman who works with the archives to properly catalog the items were both interviewed and asked to help in a police investigation when a body was found under a statue, a body they learn has been there since the late 70’s. Who can it be? From one body there are many more missing bodies that need to be found and identified. Is this the work of a serial killer? When the body is finally identified, it wasn’t who I expected and I didn’t get the closure I was looking for. The story ended abruptly and with loose ends. But I did like the cover, which was sinister looking and fit the story.

Ms. King is a new to me author.  I may give one or two of her other books a try.