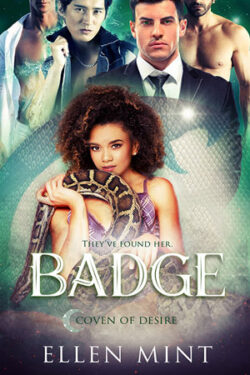 Layla Leeland has just had the most exciting six months of her life! She turned twenty-five on Halloween, celebrating in a bar with her nursing-student study-buddies. Since that night she has been collecting men. There’s Ink, an incubus who must fulfill her every need until she learns to use her magic–because she’s a witch. There is Cal, the nursing student she’s been salivating over, who is not only a powerful werewolf, but he’s most gifted in the size department. While constantly on her guard against paranormal creatures bent on mayhem and murder, she encounters a ghost in the library.

When this book starts, her men are arguing yet again over having to share Layla. But an omission starts a fight between them, and the next thing she knows, Ink is insisting he wants to break their bond–even if it sends him back to hell. Cal throws a hissy fit and stomps off. Only Daniel, the ghost who can’t even touch her, remains by her side–for love–and because she wears a tiny fragment of his bones in a pouched bag around her neck. While in a witches’ store, seeking advice on how to help Daniel attain a corporeal form again, she ignores a man who seems more interested in her than he should be. Soon after, he and his cohorts corner her in an alley, drug her, chain her wrists together, and pull a bag over her head before throwing her into an unmarked van. Only too late does she realize they’re witch-hunters.

This is the kind of book you can’t put down!Through the use of varying viewpoints, Ellen Mint’s BADGE is either told from Ink’s point of view or from Layla’s. This worked very well to keep the action moving along. If you’ve read INK, followed by the three novels and the three short stories from this series, you will be as frantic as Layla and her men to reunite her coven. If you haven’t read the other books yet, you need to get them all right now! For new readers, this one will be somewhat confusing at first, but the story is excellent, and the voices of the coven members are strong. And once again, Ms. Mint doesn’t disappoint in the sexual heat she’s so good at–both before and after the kidnapping takes place. These are real people who just happen to also be paranormal characters. But when you care about someone, you’ll overlook minor flaws–like being an immortal incubus from hell–or a werewolf up to his hackles in pack politics–or a dead man. In my next life, I want to come back as Layla!