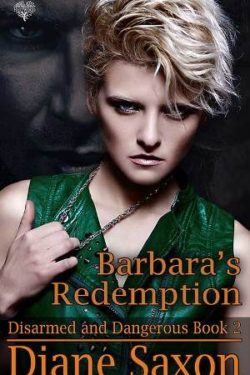 When the author asked if I would like to read BARBARA’S REDEMPTION, book two in the DISARMED AND DANGEROUS SERIES, I jumped at the chance and I was not disappointed.  I was drawn in from the beginning and it was a nice continuation from book one, FLYNN’S KISS.  There were some of the same characters and flashbacks to events in the first book that helped draw me back in.

Barbara is on the run after things went bad in Afghanistan and she’s getting blamed for things she had nothing to do with.  She’s looking for Flynn for help but when he’s not available he puts her in contact with Dominic, the psychiatrist we met in book one.  Barbara doesn’t trust easily especially when she knows something that is sure to get her killed but Dominic takes her on as a patient hoping to find out why she went AWOL per her commanding officer, or did she? There are flashbacks and reminisces as Dominic tries to get to her memories and find out what’s really going on.

There are a lot of scenes with the Dreampsych Transcender machine that Dominic’s working with.  It’s somewhat like virtual reality but totally involves the person who is in the machine. Watching Barbara’s reaction each time she is sent into a scene was nerve wracking and it was hard to distinguish between reality at times.  It doesn’t help that there are a lot of undercurrents between Barbara and Dominic and though he doesn’t want to act inappropriately with a patient the chemistry is there and impossible not to see.

Dominic works with Zak and Emilio at the center.  Zak is a nice foil but is an integral part of the storyline and always has the other’s backs.  Emilio is someone that went rogue. Does he compromise the integrity of the center?  Dominic’s daughter, Marie, is all girl and a princess to boot.  She adds a little bit of normal to the story but is wise beyond her years at only four years old.

There are multifaceted characters with a depth to them and what you see is not usually what you get.  There are battles, weapons, lies, secrets, deceit, illegal activities, sadness, fear, anger, distance, loving and love.  My heart was often in my mouth and at times I felt I was there.  I could taste the fear and the blood and I could feel the anguish while also hearing the guns going off and the pain of injuries. There is nice closure and I didn’t see the ending coming.  There is a happily ever after in the offing that I would have liked to see played out and an epilogue would have been nice.  I for one hope there will be more books in the series since there’s seems to be more stories to tell.

If you like books in the genre of romantic suspense, give Saxon’s books a try.  You won’t be disappointed.  I’ve read her ATLANTIC DIVIDE SERIES as well as her paranormal books which I don’t usually enjoy but did since Saxon puts a different twist on them.  Saxon is definitely a go to author for me.