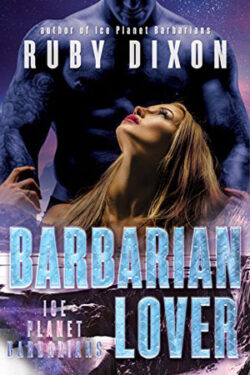 Usually when you read a book that’s in a series, you’ll have some kind of explanation during the course of the story, so you get caught up. BARBARIAN LOVER is Book 3 in a series of twenty-one books! After reading this one, I won’t be seeking out the others.

Kira is a human woman who has been kidnapped twice by aliens. The first aliens caught her and many other women, freezing some of them and abusing others during their flight away from Earth. Kira was chosen to get an implant into her ear canal that translates any language so that she can be a translator—but for some reason she was not molested. I’m not sure how the females got away, but the other aliens are looking for them, and Kira is terrified she will be found and returned to them so they can sell her into slavery.

What she’s not terrified of is the large blue alien male, Aehako, who seems to favor her. Since she’s a virgin, and he’s described as having a male member that is as long as her forearm and just as thick, one would think she’d want to run the other way. She’s only anxious because when they landed on this planet, all females were given a khui, which allows them to survive on the icy planet. The implant dulls their sense of smell and taste, which is good when they live near sulfur deposits, and most locals eat their meat raw. But when two “mated” beings are near each other, their khuis resonate—a kind of purring, which forces them to mate uncontrollable, presumably until the female is pregnant. Since Kira was told years ago that an illness made her infertile, she’s afraid she’ll never find love.

Of course she does, and with Aehako. And miraculously, their first time together results not in extreme pain for her, but rousing multiple orgasms. The sex scenes seemed more perfunctory than steamy, despite his great size. And the story rushes things that seem like they should take longer—the aliens’ return results in Kira being kidnapped—but she escapes so easily it’s ridiculous. And after being all, “Woe is me,” in the beginning, she develops into an independent, fighting female. How? Who knows. And what happens to the female who gets kidnapped—and by whom? I guess that must be in a subsequent book, because she’s never mentioned again.

Apparently this a best-selling series of self-published books. But the charm escaped me. Just one book and I’m done.