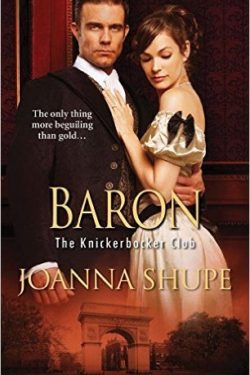 BARON by Joanna Shupe is even better than MAGNATE, the first historical romance novel in THE KNICKERBOCKER CLUB series. Although I anticipated book two after reading the first, I was surprised by William “Will” Sloane who had made a memorable first impression as a stuffed shirt in his dealings with his sister, Lizzie. Will’s character transformation is the second-best part of this book. The best part is the heroine who plays a “confidence woman” beautifully.

Ava Jones works as Madame Zolikoff, a medium who some think cons her clients out of money in exchange for her services. Ava is good at her trade, which is necessary for the survival of herself and her three siblings. When Will’s political aspirations force him to confront the con-woman who may be the end of his running mate’s political career, he doesn’t expect to fall for her. Ava’s allure is more than a con, it’s downright dangerous to all their futures.

I was immediately drawn to Ava’s mode of making a living, in addition to her young siblings who also work to support themselves. Having lost their parents, Ava feels responsible for their survival. Although what Ava does is a con, she doesn’t see it that way. She works hard to give her clients what they want or need to help them heal after the death of a loved one.

Ava isn’t in Will’s blueblood circle so it’s easy to suspect that she’ll never amount to anything further than being his mistress. Given his political aspirations, it’s hard to imagine they’ll have more than this moment in time. What transpires is surprising and made me respect Will even more.

BARON is a very sensual novel. A big portion of this couple’s relationship is based on their insatiable desire for one another. Their chemistry is combustible and neither one of them is shy. I loved their verbal sparring which added to their inability to resist each other. Ava doesn’t back down to Will’s obvious power and I laughed when she called him “railroad man” in a teasing manner.

I enjoyed the flow of BARON more than MAGNATE. It seemed smoother. Ava is such an interesting heroine for a historical romance. I liked her spunk. Her honesty and simplicity is exactly what Will needs to force him to be more human. Even though this novel is more sexually charged than I prefer, it didn’t overwhelm the plot or characterization.

The only thing I didn’t care for were two crude words used to describe Ava by the villain in the book. Those words, as well as the context in which they’re used, are disrespectful to women, in general, even though they did their job and made me despise the bad guy even more. I could have disliked him without them, rather than be reminded of words that I hate when they’re directed derogatively against women, no matter the century.

BARON can easily be read as a standalone, but to fully appreciate Will’s character transformation, it’s best to read MAGNATE first. I purchased MAGNATE for a buddy read with some friends so those discussions live on in my memory.

The two novels are similar in their sexually explicit details, but the stories are each intriguing for their individuality. Both feature dominate men and the women who dare to love them. BARON’s conflict is convincing as much as it is surprising in how it’s resolved. I don’t think I’ve read a novel with a similar conclusion. I was most surprised by Will because I didn’t like him in MAGNATE. He redeems himself in BARON. THE KNICKERBOCKER CLUB is proving to be a series to anticipate and recommend.

Joanna Shupe’s talent is evident in her ability to set a believable stage with thought-provoking characters and snappy dialogue that keeps me coming back for more.